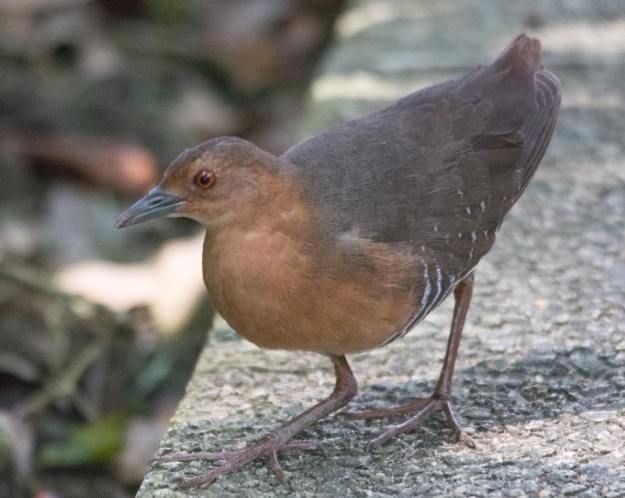 The string of rarities continued to show up and provided for an eventful January. The bird of the month is without doubt the Band-bellied Crake Porzana paykullii, found by Meena Vathyam at the Singapore Botanic Gardens (SBG) on the 19th. Thanks to her, many birders managed to see this mega rarity as their lifer. It is only the second record for Singapore after the first occurrence in 2014. The bird continued to be observed at the same small patch of vegetation for the rest of January and is probably still wintering there.

Another rarity, the Green-backed Flycatcher, at Dillenia Hut on 31 Jan 2018, by Francis Yap

On the 20th, See Toh Yew Wai found another rarity at the Jelutong Tower – an adult male Green-backed Flycatcher Ficedula elisae; Francis Yap found one at the junction of Sime Track and Rifle Range Link on the 26th; and Martin Kennewell also photographed this species 100m up the junction, on Rifle Range Link, on the 28th, likely the same individual. Elsewhere, Lim Kim Keang and Veronica Foo found another individual at Lorong Lada Hitam on the 23rd. Francis Yap also recorded an individual at Dillenia Hut, CCNR on the 31st. Another rarity was a Sakhalin Leaf Warbler Phylloscopus borealoides found at BTNR on 27th by Lau Jia Sheng and Tan Kok Hui. 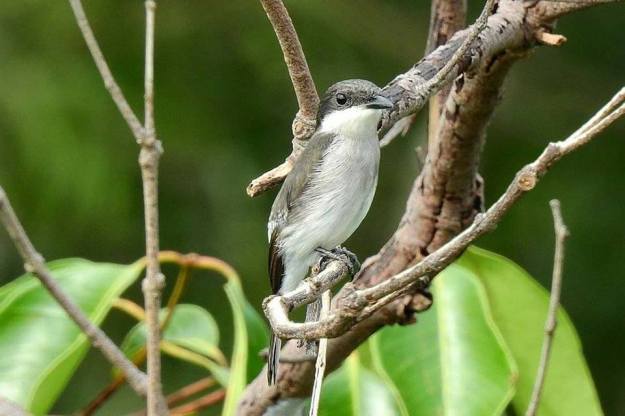 A rare non-breeding visitor, the Black-winged Flycatcher-shrike, at Jelutong Tower on 20 Jan 2018, by Thio Hui Bing

The non-migrant rarities for the month included a Black-winged Flycatcher-Shrike Hemipus hirundinaceus, the 3rd record for this non-breeding visitor, found by Martin Kennewell, in the company of Richard Carden and Thio Hui Bing, at Jelutong Tower on the 20th. Additionally, Thio Hui Bing and Lim Kim Seng also recorded two individuals of the locally rare Black-headed Bulbul Pycnonotus atriceps on the same date & locality.

At Pulau Tekong, Frankie Cheong recorded an uncommon Greater Sand Plover Charadrius leschenaultii and a flock of over 20 Marsh Sandpipers Tringa stagnatilis on the 3rd; and on the 20th, he recorded the Curlew Sandpiper Calidris ferruginea, Red-necked Stint Calidris ruficollis and Long-toed Stint Calidris subminuta. A Little Ringed Plover Charadrius dubius was also recorded at Pulau Tekong on 3rd by Frankie Cheong, and two birds at Kranji Golf Course on 4th by Luke Milo Teo.

Alan OwYong recorded a sub-adult Hodgson’s Hawk Cuckoo Hierococcyx nisicolor at West Coast Park on the 3rd. Earlier in the morning Anthony Nik and Stuart Campbell photographed two unusual female flycatchers there. One was a Blue and White/ Zappey’s Flycatcher and the other had yet to be identified. Veronica Foo found another Hodgon’s Hawk Cuckoo at Bambusetum, SBG, where she also spotted the White-rumped Munias Lonchura striata, on 21st. The munias were present throughout the rest of the month feeding on seeds. A Chestnut-winged Cuckoo Clamator coromandus was recorded at SBWR on the 20th by Gautham, while a Violet Cuckoo Chrysococcyx xanthorhynchus was found at Telok Blangah Walk on the 22nd by Mark Nelson Valino . At Lorong Lada Hitam on the 23rd, a Chestnut-bellied Malkoha Phaenicophaeus sumatranus was recorded on the 23rd by Lim Kim Keang and Veronica Foo. On the 24th, an adult Drongo Cuckoo Surniculus lugubris was recorded at Hindhede NP by Alan OwYong.

A Black-capped Kingfisher Halcyon pileata was recorded by Luke Milo Teo at Turut Track on 4th, and by Alan OwYong at Kranji Marshes on 5th, and was still there on the 28th during an NSS outing. Another was photographed in flight at SICC Golf Link on the 5th by Francis Yap. On the 27th, Vincent Lao found an Oriental Dwarf (Black-backed) Kingfisher Ceyx erithaca at Lower Pierce Reservoir.

A Cinnamon Bittern Ixobrychus cinnamomeus was recorded at Bedok Central on the 5th by Eileen Ruth; another at Bulim on the 6th by See Toh Yew Wai; and another at Neo Tiew Lane 3 on the 14th by Alan OwYong. At Bulim on the 7th, Alan OwYong found a Von Schrenck’s Bittern Ixobrychus eurhythmus, an uncommon migrant. At Lorong Lada Hitam on the 23rd, a Black Bittern Dupetor flavicollis was found by Lim Kim Keang and Veronica Foo. 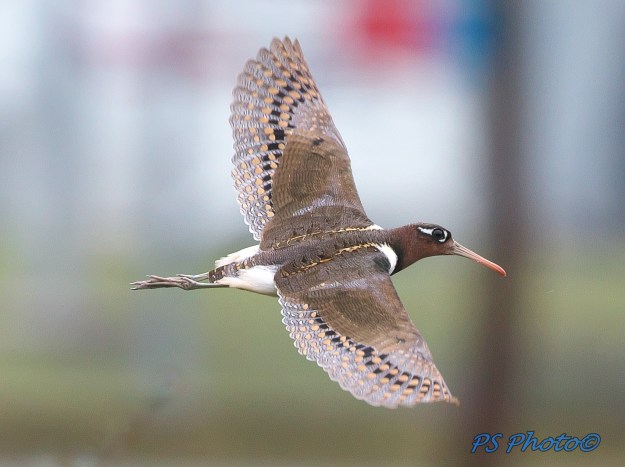 Amazing flight views of a Greater Painted Snipe, at Bulim Avenue on 14 Jan 2018, by Pary Sivaraman

Two Baillon’s Crakes Porzana pusilla were found by See Toh Yew Wai at Bulim on the 6th, while David Tan reported another found inside an apartment at Tampines on the 11th, and Goh Cheng Teng found another of this scarce migrant at Turut Track on the 14th. 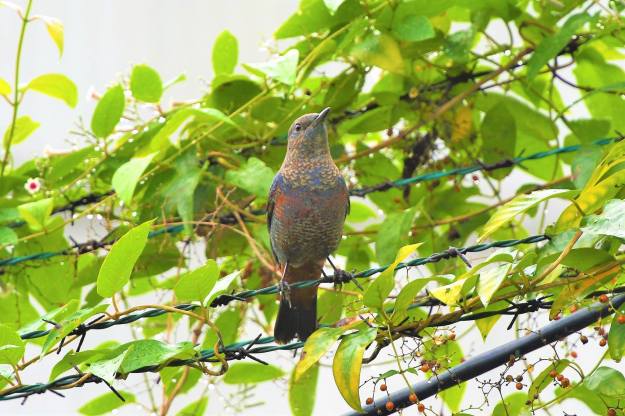 Art Toh had a lucky encounter with a Blue Rock Thrush Monticola soltarius at Labrador Villa Road on the 8th. He also found a Blue-winged Pitta Pitta moluccensis at SBG on the 18th. The next day, on the 19th a Hooded Pitta Pitta sordida was recorded at BTNR by Looi Ang Soh Hoon.

Martin Kennewell reported seeing around 50 White-shouldered Starlings Sturnia sinensis feeding on Bottlebrush trees at Seletar Club Road on the 16th. A Grey Nightjar Caprimulgus jotaka was recorded at NTU on the 22nd by Luke Milo Teo, and another at Bidadari on the 27th by See Toh Yew Wai. At DFNP on the 24th, an Orang-headed Thrush Geokichla citrina with a deformed (crossbeak) bill was found by Laurence Eu.

This report is produced by Tan Gim Cheong and Alan OwYong based on selected postings in various facebook birding pages, bird forums, individual reports and extracts from ebird. This compilation is not a complete list of birds recorded for the month and not all the records were verified. We wish to thank all the contributors for their records. Many thanks to Meena Vathyam, Francis Yap, Thio Hui Bing, Goh Cheng Teng, Pary Sivaraman, and Art Toh for the the use of their photos.