December marked the arrival of two migrant raptor species. The first Eastern Marsh Harrier for the season, a juvenile, was photographed in flight at Kranji Marshes on the 2nd at 6:59am. This is fairly typical behaviour for the species as they are early movers. The first Black Kites of the season came in a group of three over Pulau Ubin on the 26th. The three juveniles were flying about over Pulau Sekudu and the nearby fish farms, probably hoping to scavenge.

The rufous morph Oriental Scops Owl found on 30 November at Dairy Farm Nature Park was still around on the 1st, but disappeared thereafter. On the 9th, a grey morph Oriental Scops Owl was found roosting high up a nearby tree; it was recorded again on the 11th and the 17th at the same locality. This grey morph individual might also have been the same one found in January this year, returning to the same locality in Singapore after breeding in the northern latitudes!

Three Jerdon’s Bazas were recorded. One frequented the Tampines Eco Green to Pasir Ris Park area throughout the month; another was recorded at Ang Mo Kio Town Garden West on the 10th and 11th; and the last one flew by Jelutong Tower on the 22nd. Two Common Buzzards were recorded; the first was photographed on the 2nd at Seletar Aerospace Drive; on the 6th, 2 birds were photographed at nearby Seletar West, and one of the birds may have been the same bird first recorded on the 2nd. 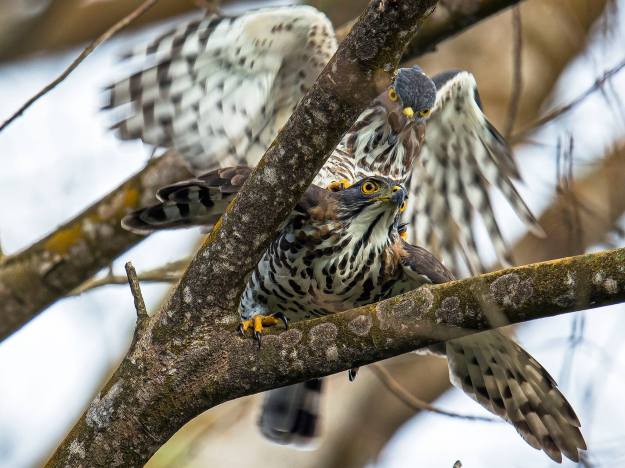 For the uncommon Crested Goshawk, 11 birds were recorded. Notably the pair at Sentosa was observed mating on four days: the 24th, 25th, 26th and 28th. The pair was observed bringing small branches to reinforce their nest high up the bare tree and on the 25th, the female goshawk was photographed breaking a small branch with its beak. A juvenile goshawk, probably from the pair’s last breeding attempt, was also seen at the tree on the 24th.

All three records of the torquatus Oriental Honey Buzzards were of the tweeddale form. An adult male was recorded at Pasir Ris Park on the 15th, the record on the 21st was probably of the same individual. Another was recorded at Toa Payoh on the 17th.

Of the two Grey-headed Fish Eagles recorded, one was at Bishan Park and the other at Little Guilin, where a new nest had been built on a tall tree but nesting was not observed during the month. The other resident raptors recorded included the Changeable Hawk Eagle, Brahminy Kite and White-bellied Sea Eagle. 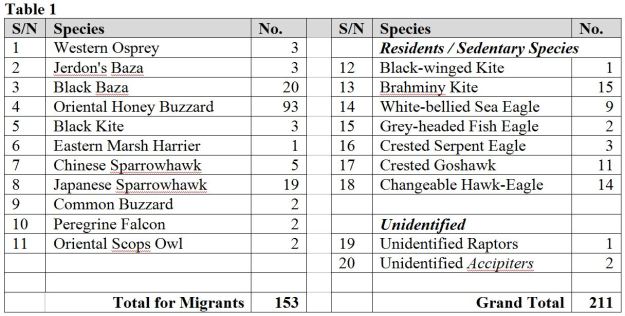 Many thanks to everyone who had reported their sightings in one way or another, and especially to Teo Chee Kee and Michael Phua for the use of their photos.