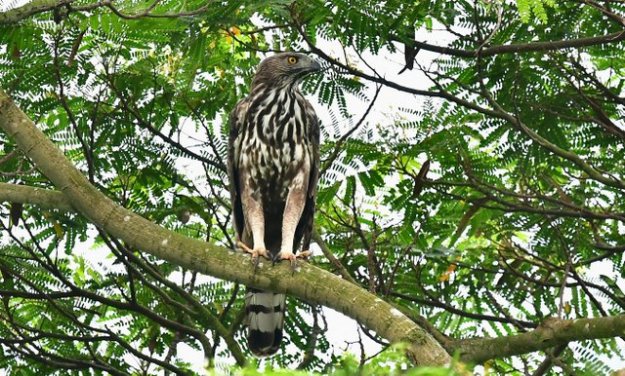 For the resident raptors, highlights included the locally rare Crested Serpent Eagle on 13 July at South Buona Vista Road. On 18 August at Little Guilin, a juvenile Grey-headed Fish Eagle was observed whining constantly in the presence of an adult, but just 2 weeks later, on 1 September, the adults were seen building a new nest on a tall tree.

A juvenile Crested Goshawk was recorded at Pasir Ris Park on 13 July, and Changi Village on 10 September, with a shrew in its talons; adults were recorded on 17 August at Kent Ridge Park, 21 August at Aljunied (2 birds), and 7 September at Sentosa, with a Plantain Squirrel in its talons. The Black-winged Kite was recorded on 9 July at Kranji Marsh, 10 July at Punggol Barat (2 birds) and 20 August at Changi Point Ferry Terminal. A Changeable Hawk-eagle which probably fledged sometime in June or earlier was seen on the nest at Dairy Farm area on 1 July and 15 July, maybe it was ‘homesick’.

Many thanks to everyone for their records and to Xu Weiting and Laurence Eu for the use of their photos.

By Goh Cheng Teng.
Introduction:
The Malaysian Plover is an uncommon resident shorebird found around the coastal sandy area of mainland Singapore and Pulua Semakau. First recorded in 12 October
1963 at Jurong by JC Darnell and MA Webster,  where subsequent sightings were also seen. They have been since recorded at Changi Coast, Tuas and Semakau.  One or two pairs have also been reported in Pulau Tekong, Seletar Dam, Marina East and Labrador as well.  It is considered nationally threatened ( Lim K S 1992) and globally near threatened.
On 17 September 2017, Lester Tan and I were scouring the shoreline of Marina East in search of the Red-necked Stint Calidris ruficollis, that had been reported earlier in the week when we came across a Malaysian Plover Charadrius peronil chick following its parents around. As we approached closer, the chick laid still as it attempted to camouflage itself among the debris and uneven surface of the seawall. 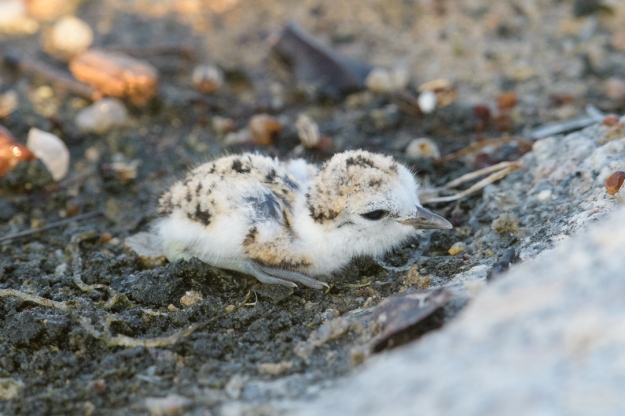 17 September 2017 Marina East. Chick trying to hide among the debris.
After a brief period of close up observation, we retreated to allow the parents to collect the chick, which they did after we were a distance away.

17 September Marina East. Furry chick showing some of the sandy plumage.
The following weekend, on 23 September, we returned to the same section of the seawall in hopes of seeing the progress of the chick. We were not disappointed. 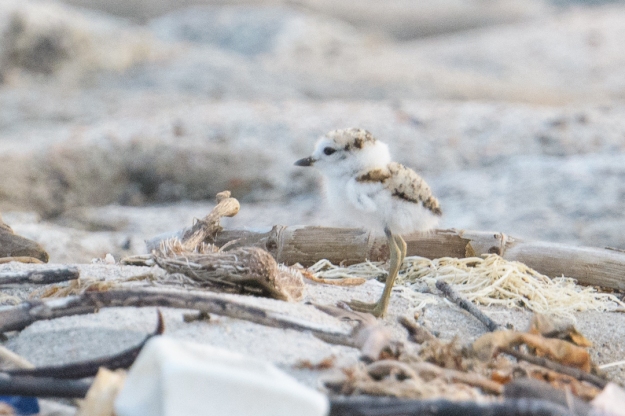 23rd September 2017. Marina East. Glad to see it is still around.
The next day on 24th, the chick was again sighted. On this occasion, the family was observed venturing to the top of the seawall as well.

The family venturing up the seawall on 24th September 2017.
Unfortunately, we were unable to return to Marina East in the subsequent weeks to further observe the chick’s progress. This series of sightings, however brief, has been a treat for us, and we hope the chick survived to adulthood successfully.
Addendum:
According to the Avifauna of Singapore (Lim Kim Seng 2009),  breeding had been reported in March and April and its breeding season remains to be investigated.
This record is probably the first of a pair breeding in September although I
have previously observed 2 nesting of Malaysian Plovers in Tuas South in July and August. We hope that this record will add to our knowledge of the breeding cycle of our only resident shorebird and help with their protection. 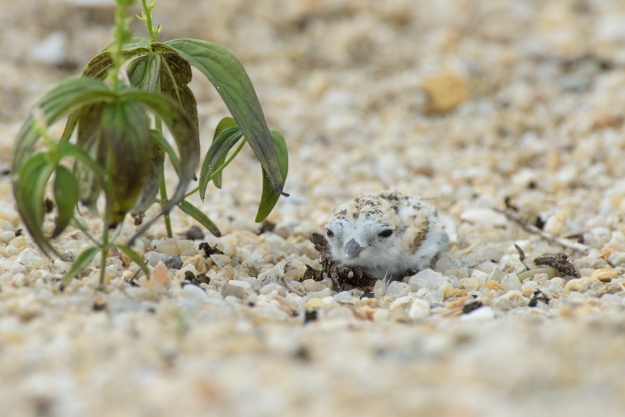 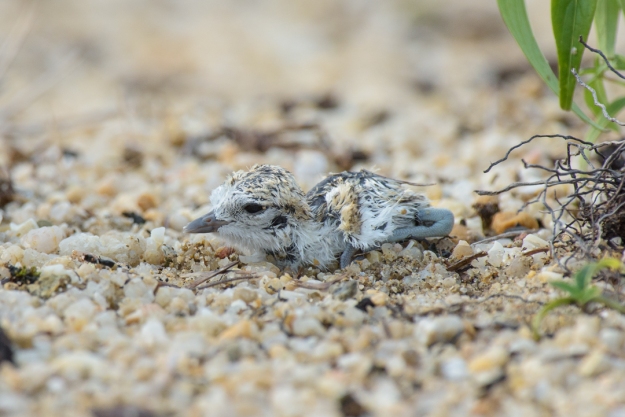 NESTING AND BREEDING RECORD OF STORK-BILLED KINGFISHER IN SINGAPORE

The Stork-billed Kingfisher is the largest of the 8 species of kingfishers known to occur in Singapore. It has a wide distribution and can be found from the Indian subcontinent, mainland Southeast Asia to Singapore and east to the Philippines and Sulawesi. In Singapore, it is an uncommon resident and can typically be found in the mangroves, forest edges around our reservoirs and water areas. Some of the places include Sungei Buloh Wetland Reserve, Kranji Marsh, Singapore Botanic Gardens, Pasir Ris Nature Park, Bukit Batok Nature Park, Hindhede Nature Park, MacRitchie Reservoir and Pulau Ubin.

Like many of our resident birds, there is not much documentation on the nesting or breeding of this species. Lim KS1 mentioned that breeding has been reported but nest has not been found in Singapore.

On 4 June 2017, I was scanning around the Pekan Quarry, Pulau Ubin when I noted a pair of Stork-billed Kingfisher at the far end of the quarry. The pair was observed entering into a termitarium nest. The termitarium was appended on bamboo plants growing at the edge of the quarry pond.  During my brief period of observation, the kingfishers were observed to fly into the hole periodically. Often one bird could be seen to perch nearby while the other is in the hole. This behaviour suggest that the birds were possibly nesting in the termitarium. 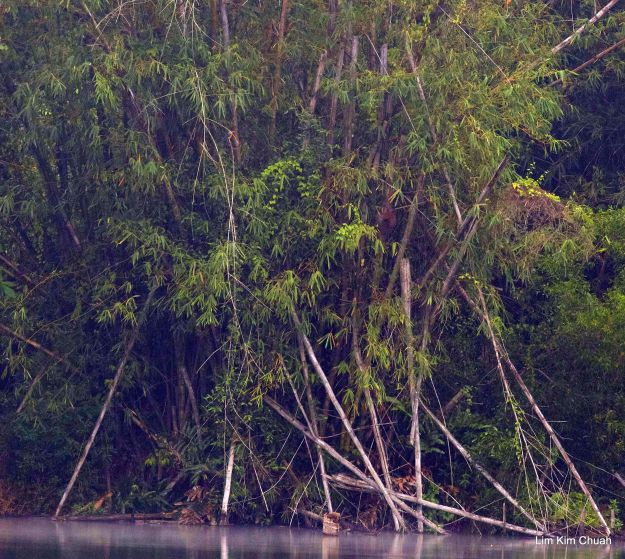 To add to our breeding record of this species, Marcel Finlay observed an individual at the Petai Trail, MacRitchie Reservoir in 4 July 2017. The bill of this individual was mostly black and the legs were not the usual bright red. These features are indicative of a juvenile bird which is not often reported in Singapore.

I hope this short note will add to our knowledge of breeding birds in Singapore. 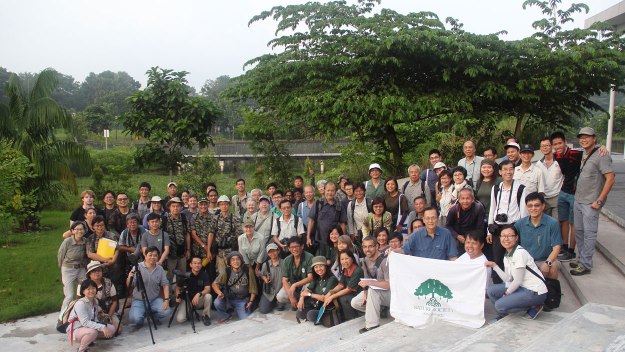 With several teams having photographed 40-odd species according to their log sheets, the fight for second and third place in the photography category was a tight one. In the end, it boiled down to things such as ensuring the photos for all species listed were submitted, submitting the photos in readable format (i.e. jpg and not raw, which we couldn’t read) and how closely the logged name matched the checklist name, etc. Future teams please note!

All teams combined, a total of 150 species were recorded. Among these, 3 species are listed as rare. They are the Lesser Adjutant at Sungei Buloh Wetland Reserve on 7 October at 6:11pm (an excellent record!); Little Grebe at Lorong Halus Wetlands on 8 Oct – both species were recorded by the Malay Pot-bellied Laughingthrushes; and the Blue-eared Kingfisher at Kranji Marshes on 8 Oct recorded by various teams.

On 3 October 2017, following Mr Lim Kim Keang’s alert of a few wagtail species sighting at Yishun,  I went down in the evening to a block of flats to see for myself this interesting phenomenal congregation and roosting of the wagtail species. With dimming light, grey sky and light drizzle, I did not expect anything much.

A Yellow Wagtail (Motacilla flava) was also seen perched momentarily before it was startled by more incoming flock of Grey Wagtails (Motacilla cinerea). It flew too soon to get a record shot of it. There must have been more than a hundred of them. Alfred Chia arrived slightly after me and he too expressed the large number of Grey Wagtails (Motacilla cinerea) seen as unusual, as based on previous report and status, they are an uncommon winter visitor and very small numbers were seen during each migratory period.

A surprising find were a pair of White Wagtails (Motacilla alba) and Forest Wagtails (Dendronanthus indicus) seen together on the roof top as well as roosting subsequently among the palm tree on the ground.

As it was my first time observing such large numbers of Grey Wagtails (Motacilla cinerea) as well as the congregational roosting of all the 4 species together, it certainly was a sighting to behold. 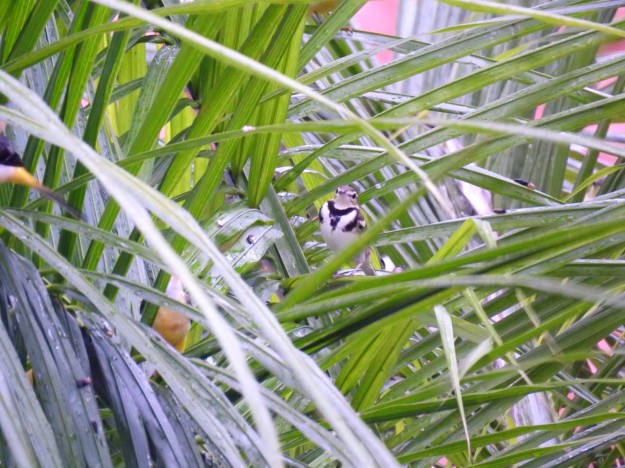 The puzzling questions that come up after this phenomenal observation:

The autumn migration is truly underway this month with more passerines reported all over the island. Out of the twenty plus arrivals this month, only four beat their previous early arrival dates. Some like the Arctic Warblers were very late.

The list of the first arrivals of the season:

(Note: Please notify alan.owyong@gmail.com if you had an earlier sighting of any of the above or unreported species) 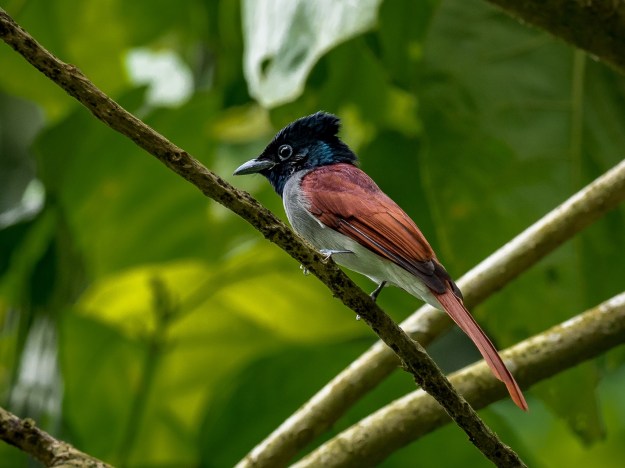 Based on our previous pelagic trips, mid September was the height of the passage of the Swinhoe’s Storm Petrels Oceanadroma monorhis, and Bridled Terns Onychoprion anaethetus, with counts of 5-600 birds. Unfortunately the 17th September trip organised by the Bird Group for NSS members came back with very low counts for both (16 for Bridled and 18 for the Storm Petrels). But they did established new early arrival date for the 25 Aleutian Terns Onychoprion aleuticus. Other seabirds recorded by Alfred Chia, Lim Kim Keang, Lim Kin Seng, Con Foley and others were 25 Swift Terns Thalasseus bergii, 3 Lesser Crested Terns Thalasseus bengalensis, and 1 White-winged Tern.

With more birders and photographers in the field it was not surprising that a good number of rare and uncommon resident species were reported, most of them from Pulau Ubin. The elusive Mangrove Blue Flycatcher Cyornis rufigastra, was heard calling along the Chek Jawa boardwalk at Pulau Ubin on 1st by Low Choon How and heard again by Veronica Foo on 3rd. Staying at Ubin, Veronica added 3 Black-crested Bulbuls Pycnonotus flaviventris, from Butterfly Hill on the 15th, an unusual record for Ubin. A day later James Tann returned with great photos of the Mangrove Whistler Pachycephala cinerea, a much sought-after island species. There were two birds at Ketam according to Adrian Silas Tay. 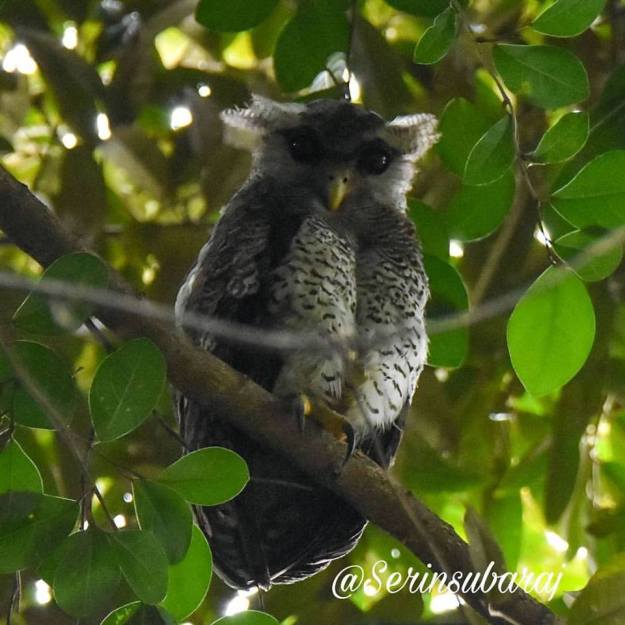 The NParks survey team and volunteers did one better when they found a juvenile Barred Eagle Owl Bubo sumatranus, among the durian trees on the 18th. Subsequent visits confirmed the presence of its parents nearby although out of sight. This is the first evidence of the presence of a breeding family of this rare owl in Singapore. 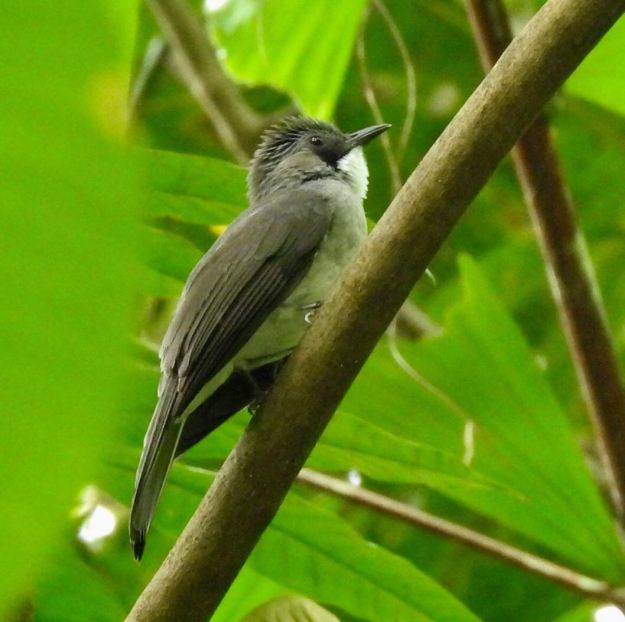 The female Black Hornbill Anthracoceros malayanus, made an appearance on 21st (Alan OwYong) feeding together with the Oriental Pieds at Butterfly Hill. During the hunt for the owl, See Toh Yew Wai, Francis Yap and friends spotted a Ruddy Kingfisher Halcyon coromanda, there on 23rd. This could be our resident minor race or a migrant. The previous earliest arrival date of the migratory Ruddy Kingfisher was also on the 23rd at Pasir Ris Mangroves in 1989. The last uncommon record for Ubin were 2 Cinereous Bulbuls Hemixos cinereus, a non-breeding visitor, seen by Lim Kim Keang, Alfred Chia and Veronica Foo on 24th.

Other notable residents was a King Quail Excalfactoria chinensis, from Kranji Marshes on 10th by Martin Kennewell, 14 Lesser Whistling Ducks Dendrocygna javanica, at Lorong Halus pond on 15th by Lim Kim Keang, 3 White-rumped Munias Lonchura striata, at Sentosa Cove on 18th by Lim Kim Seng. A high count of 6 Red-legged Crakes were seen and heard calling at Bukit Brown on 19th and 20th by Marcel Finlay. An Eastern Barn Owl Tyto delicatula, at Buloh Crescent on 29th by Derrick Wong, 4 Lesser Adjutants Leptoptilos javanicus, seen flying from Kranji Marshes Tower on 30th by Martin Kennewell and a Yellow-crested Cockatoo Cacatua sulphurea, at Sentosa on 30th by Lim Kim Seng. The White-rumped Munia is a new record for Sentosa but it’s status will required verification. The sighting of the 4 Lesser Adjutants was the largest for this former resident so far in Singapore. Lets hope they will re-establish here again.

This report is compiled by Alan OwYong and edited by Tan Gim Cheong from selected postings in various facebook birding pages, bird forums, individual reports and extracts from ebird. This compilation is not a complete list of birds recorded for the month and not all the records were verified. We wish to thank all the contributors for their records. Many thanks to Adrian Silas Tay, Terence Tan, Robin Tan, James Tann, Serin Subaraj, Veronica Foo and Lim Kim Seng for the the use of their photos. Please notify alan.owyong@gmail.com if you find errors in these records.