Most of the winter visitors have left our shores for their breeding grounds in North Asia. Only a few wetland species like the Black Bitterns, Dupetor flavicollis, were still at Gardens by the Bay and Seletar Ponds and Blue-winged Pittas, Pitta moluccenis, at Singapore Botanic Gardens are taking their time to move back. Good to monitor these Pittas during the coming months to see if they stay around.  A Hooded Pitta, Pitta sordida, was released after it recovered from crashing into the Compassvale Secondary School in Sengkang on 3rd by Eugene Ng. Lim Kim Keang recorded a new late date for the Indian Pond Heron, Ardeola grayii, at Pasir Ris Farmway 3 on 8th. Lim Kim Seng reported over summering Little, Egretta garzetta, and 10 Great Egrets, Ardea alba, at Sungei Buloh on 26th.

So the focus was on our breeding residents for our birders and photographers. For a change we will list some of the important sightings on a week to week basis for this report. 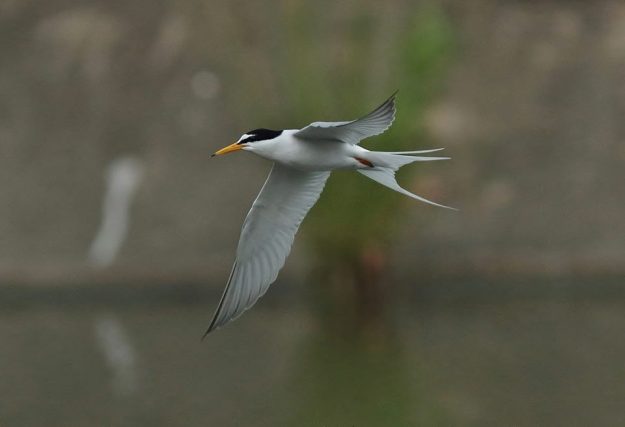 A pair of Lesser Whistling Ducks, Dendrocygna javanica, found a nice resting place at Seletar Ponds, outside the usual places (Zacc HD 1st). The Little Terns, Sternula albifrons, are raising another brood and have returned to the Tampines Canal on 3rd for small fishes to feed their chicks (Seng Alvin). Lim Kim Chuah got a up close iphone  shot of a dead Western Barn Owl, Tyto alba, at Jurong Island on 4th. It must have crashed into one of the buildings there. Following Kieta Sin’s sigthing of a male Violet Cuckoo, Chrysococcyx xanthorhynchus, at Kent Ridge Park, he and Alan OwYong found a female Violet and a Banded Bay Cuckoo, Cacomantis sonnerati, at the same place on 6th. See Toh and friends went for a pelagic trip to the Straits of Singapore on 7th and recorded 2 rare Short-tailed Shearwaters, Puffinus ternuirostris, and several Aleutian Terns, Onychoprion anaethetus, and Lesser Crested Terns, Thalasseus bengalensis, on their way back north. A Spotted Wood Owl, Strix seloputo, was reported by Art Toh at Keppel Bay on 8th, a new location for this owl.

Richard White has been keeping a close watch on the birdlife at the Botanic Gardens. He reported the return of the Black-crowned Night Herons, Nycticorax nycticorax, at the Eco lake. They were in breeding plumage. Maybe they will nest there again. The Stork-billed Kingfisher, Pelargopsis capensis, that went missing from Kent Ridge Park for more than a decade was spotted again during a recce by Alan OwYong. (Keita Sin messaged me that he saw the Kingfisher in August last year right up to this April).  Paddyfield Pipits, Anthus rufulus, were seen nest building at the open field at the Marina Barrage on 14th ( Alan OwYong). 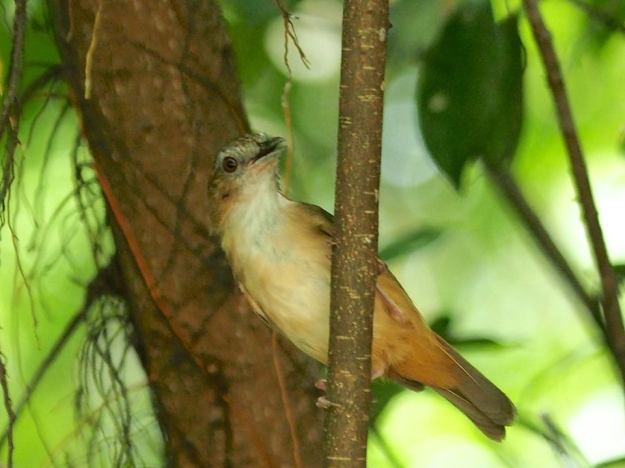 A family of 4-5  Abbott’s Babblers, Malacocincia abbotti, was very active at the Marsh Gardens West Coast Park when Francis Yap paid a visit there on 17th. These babblers are not that common in the south. Confirmation of the Sunda Scops Owl, Otus lempiji, breeding in Sentosa came when Sarah Chin found an immature at the Tanjong Beach Station on 19th. Another Sunda Scops Owl was reported from Lower Pierce Reservoir by Vincent Lao on 20th. A hard to see White-browed Crake, Ponzana cinerea, was spotted by Lim Kim Chuah during a Bird Group trip to the Kranji Marshes on 22nd.

Atis Banerjee reported a new location for the Buffy Fish Owl, Ketupa ketupa, at Tanjong Rhu on 23th. A family of Red Legged Crakes, Rallina fasciata, have been seen at the Singapore Botanic Gardens on 23rd (Richard White). They have been regulars there for some years now. The non breeding visitor Western Osprey, Pandian haliaetus, was still hanging around Sungei Buloh on 23rd,(Cindy Yeo). The Great-billed Heron, Ardea sumatrana, made its return to Berlayer Creek with sightings there on 24th by Shirley Ng. James Tann reported the fledging of two Oriental White-eye, Zosterops palpebrosus, chicks at Jurong Eco Gardens on 24th. The resident ernesti race Peregrine Falcon, Falco peregrinus, was back at Church Street on 26th May (Lee Ee Ling). Lucy Davis had a pair of Pin-striped Babbler, Macronous gularis, raising two chicks in her garden at Wessex on 26th. A forest specialist, Greater Green Leafbird, Chloropsis sonnerati, was seen at the MacRitchie Reservoir on 26th (Lim Kim Seng). A Slaty-breasted Rail, Gallirollus striatus, at Tampines Eco Green on 27th (Seng Alvin). Four Green Imperial Pigeons, Ducula aenea, Blue-eared Kingfisher, Alcedo meninting, Great-billed Herons, and White-rumped Shamas, Copsychus malabaricus, were some of the uncommon birds seen during Pesta Ubin day on 29th (LIm Kim Chuah).  Francis Yap reported a pair of uncommon Chestnut-winged Babblers, Stachyris erythroptera, at Upper Seletar on 29th. A family of Ruddy-breasted Crakes, Ponzana fusca, with four fledged chicks were photographed by Paul Thong at Gardens by the Bay on 30th. An important breeding record for this uncommon rail spreading out to the south. Andrew Tann reported them there earlier on 21st. 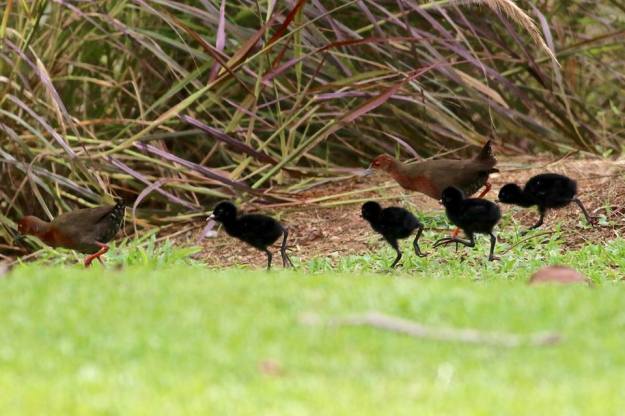 An important record of a family of uncommon Ruddy-breasted Crakes at SBTB. Photo: Paul Thong.

This report is compiled by Alan OwYong and edited by Tan Gim Cheong from selected postings in various facebook birding pages, bird forums and individual reports. Some were not verified. We wish to thank all the  contributors for their records. Many thanks to Lim Kim Chuah, Geoff Lim, Seng Alvin, See Toh Yew Wai and Paul Thong  for the use of their photos.

The boarded up “valley” section to facilitate drainage works. The hillock is on the left.

This morning members of the Nature Society (Singapore)’s Conservation Committee and Bird Group made a site visit to the old Bidadari Muslim Cemetery with the planners, architects, engineers and landscape contractors from the Housing and Development Board (HDB) and staff from the National Parks Board (NParks). The purpose of the visit is to mark out the boundaries of the hillock where most of the migrant species were found. The hillock is centered around the “Bida Studio” at the western end of Bidadari.

The HDB had agreed in our previous meeting to retain and keep this hillock largely untouched as a natural sanctuary. It will be part of the main 10 hectare park. We showed and explained to the planners the importance of keeping the different clusters of bushes and clumps that are frequented by migrant flycatchers, pittas and kingfishers. The trees will be retained for the mid-level species like the cuckoos, shrikes and paradise flycatchers to forage. Some of the fringing Albizias will be cut down for safety reasons. On the ground level, the weeds and grasses surrounding the bush and clump clusters will be allowed to grow as buffers with trimming done only in the open areas. All these measures will hopefully preserve much of the original character of this core area for the winter visitors and passage migrants that stop over here during the migration season.

Housing and Development Board’s landscape planner and engineers marking the trees  to be retained.

The “valley” parallel to Upper Serangoon Road and a diagonal stretch across the cemetery has been boarded up to facilitate the construction of infrastructural work for the estate. The hillock and the “studio” where we do most of our birding is still accessible from the Bartley Road side. Even when work starts at the lower section along Bartley Road in the coming years, nature lovers will be able to walk through this hillock sanctuary to bird watch and photograph them. Hopefully some of the regular visitors will still return to this part of Bidadari.

Dr. Ho Hua Chew pointing out the importance of keeping some of the Albizias for the foraging Black Bazas, nesting Changeable Hawk Eagles and other passerines.

Even though we were not able to save all of the Muslim section of Bidadari, at least this core area will be kept “wild” to provide a refuge for our winter visitors to rest and refuel during their migration.