The World Parrot Count was initiated eight years ago by Michael Braun and Roelant Jonker from the parrot researchers’ group of the International Ornithological Union (IOU). A key objective of the study was to document the status and abundance of feral and non-native parrots in urban environments globally where populations are established. Being part of this study provides an excellent opportunity for us to also monitor native parrot abundance and diversity in Singapore beyond our nature reserves. Given that some species such as the non-native Red-breasted Parakeet (Psittacula alexandri) have increased in abundance across Singapore, it is also timely to identify areas where these species are concentrated and their roost sites.

This year, the site with the highest species richness was Bukit Brown Cemetery with a total of six species of parrot recorded including an escapee Red Lory (Eos bornea). The Long-tailed Parakeet (Psittacula longicauda) was the most numerous parrot recorded during the count, with a total of 899 individuals seen, making up 50.8% of all parrots recorded during the count. However, this was a significant decrease from 2017’s total of 1,521 individuals, the 1,837 individuals in 2016 and the high count of 2,059 observed in 2015. 738 Red-breasted Parakeets were also recorded, making up the bulk (41.7%) of the remaining parrots recorded. Other species recorded include small numbers of Tanimbar Corellas (Cacatua goffiniana), Coconut Lorikeets (Trichoglossus haematodus), Rose-ringed Parakeets (Psittacula krameri), Blue-crowned Hanging Parrots (Loriculus galgulus) and Yellow-crested Cockatoos (Cacatua sulphurea).

During the census, parrot numbers peaked between 7 pm and 7.30 pm where 965 parrots were counted.  The largest parakeet flocks mainly arrive at last light, with counters at many sites managing to observe the noisy spectacle of flocks of parakeets returning to their roosting trees just before complete darkness. 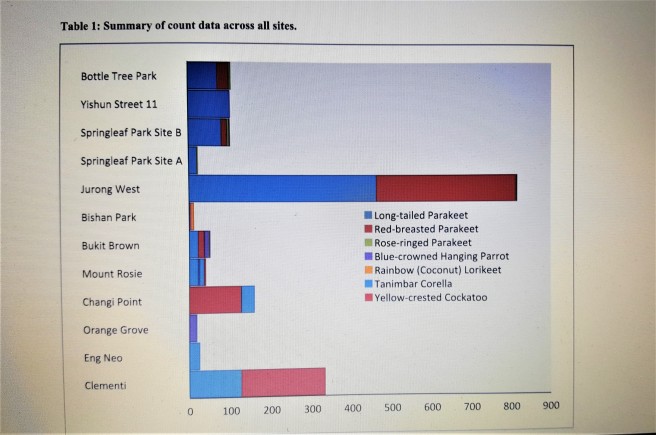 This is the first time in the count’s eight year history that large flocks of both parakeet species have been recorded roosting together at certain urban roost sites, seemingly disproving the hypothesis that urban parakeet roosts in Singapore were segregated by species. It is unclear whether the decline in Long-tailed Parakeet numbers around Yishun and their appearance at previously unused roosting sites in Western Singapore are linked. However, it shows that the roosting behaviour of Singapore’s urban-adapted parakeets are potentially very fluid in a constantly changing urban landscape. As such, it wouldn’t be surprising to find that Yishun’s parakeet flocks may also have shifted to new staging and roosting sites, potentially in adjacent areas such as Sembawang. It is hoped that birdwatchers will continue to report parakeet roosts within their neighbourhoods, so that a more complete picture of Singapore’s urban parakeet population can be obtained and unusual observations in roosting ecology documented through regular surveys such as this count.