The cuckoos are well known examples of brood parasites, birds that lay their eggs in the nest of of another bird species and relying on their host to raise the young. Not all species of cuckoos do that however. In the local context, we have the malkohas and coucals that raise their young on their own, yet are part of the cuckoo family.

The most famous resident cuckoo is the Asian Koel, that is the source of most number of complaint from the public due to its noisy nature. It is known to use the crows and mynas as surrogate parents elsewhere. The House Crow is listed as the most common surrogate host for the koel in Singapore. However, less work and documentation exist for this host-brood parasite interaction even though these two species are a common sight. This is because crow nests are normally destroyed on sight as they are considered a pest species.

This article will therefore deal with the other resident cuckoos that we have more documentation on.

Square-tailed Drongo-Cuckoo
The Square-tailed Drongo-cuckoo (Surniculus lugubris) is one of the more common resident cuckoo. One of the peculiarity of this species is that there are two population. One that is resident and another that is a winter visitor. Some authorities consider them to be separate species but for now, we will only look at the resident subspecies. This cuckoo’s local hosts include the Pin-striped Tit-babbler and Yellow-vented Bulbul. Just across the border in Panti, Malaysia, an Olive-winged Bulbul was also reported. 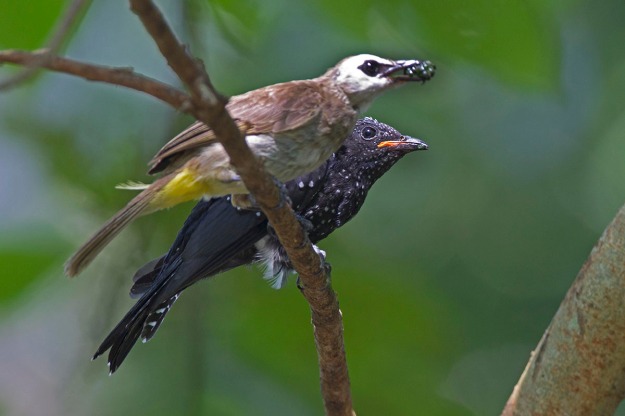 (A young Square-tailed Drongo-Cuckoo ready to be fed by a Yellow-vented Bulbul. Photographed by Alan Ng at Dairy Farm Nature Park in August 2011)

(A young Square-tailed Drongo-Cuckoo being fed by a Pin-striped Tit-babbler. This record is from Hulu Langat, Malaysia and was photographed by Christopher Lee in May 2010. We have other records of this host species at Macritchie Reservoir previously)

(A Square-tailed Drongo-Cuckoo chick being fed by an Olive-winged Bulbul. Photographed by Johnny Chew at Panti, Malaysia in July 2010)

Plaintive Cuckoo
The Plaintive Cuckoo (Cacomantis merulinus) is a more uncommon resident cuckoo species. It is named for the plaintive call of the male in mating season. In the past, the British colonial birders referred to it as the Malayan Brain Fever Bird due to its call and the Malay called it Burung Mati Anak (Bird whose child died), such is the emotional intensity that it elicits. This species local host is reported to be the Common Iora but recent photographic report was with the Ashy Tailorbird.

(A Plaintive Cuckoo chick being fed by a Ashy Tailorbird. Photographed at Pasir Ris Park by Johnson Sia in September 2014) 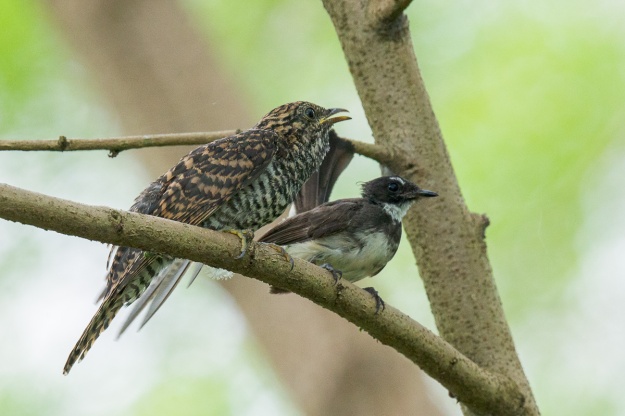 (A Rusty-breasted Cuckoo chick post-feeding with its surrogate parent, the Malaysian Pied Fantail. Photographed by Francis Yap at Lorong Halus in August 2012) 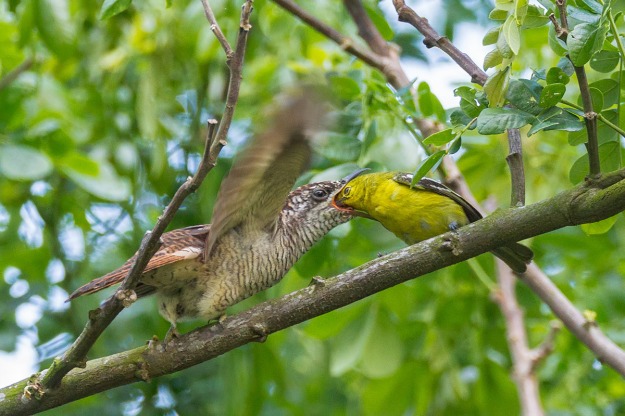 (A Banded Bay Cuckoo chick being fed by a Common Iora. Photographed by Francis Yap at Lorong Halus in May 2011)

(The video shows the behaviour of the chick in the presence of the the host parent, where the combination of call, wing flapping position and opened mouth with prominent gape all direct the iora with food to the cuckoo. This was taken at Lorong Halus in June 2011)

Little Bronze Cuckoo
The Little Bronze Cuckoo (Chrysococcyx minutillus) a common resident cuckoo species that is easily found in the various nature parks and gardens. Interestingly before 1964, they were not recorded in Singapore. There are two host species historically recorded, the Golden-bellied Gerygone and the Olive-backed Sunbird (2008).

(Video of a soon to be fledged Little Bronze Cuckoo in the nest, being fed by Golden-bellied Gerygone parents)

Violet Cuckoo
The last cuckoo in the roundup is the Violet Cuckoo (Chrysococcyx xanthorhynchus), probably the rarest resident cuckoo in Singapore. It’s host species include the Brown-throated Sunbird, Van Hasselt’s Sunbird and the Olive-backed Sunbird. Unfortunately we could not obtain any local photos of these although we had sightings records in the past. Perhaps the cuckoo’s rarity does not permit an easier encounter. Looking through the Internet we do have a photograph of a Brown-throated Sunbird feeding a chick from Sabah that can be found here: https://www.flickr.com/photos/samsonso_photography/5991709159/

That about cover the resident cuckoos in Singapore and their host species. The sight of a small parent feeding a much larger bird often surprise the birder, even experienced ones. Most of the time, this size imbalance occur due to brood parasitism by the cuckoos. Do document it so that we have a much better understanding of this behaviour. 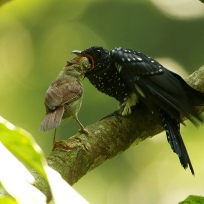 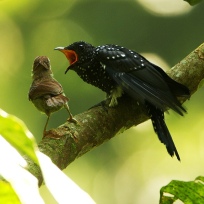 Notice: All photographs and videos are copyrighted by the respective photographers who contributed to this article: Alan Ng, Christopher Lee, Johnny Chew, Johnson Sia and Francis Yap. All rights reserved.

3 thoughts on “Resident cuckoos and their host parents: A pictorial guide”