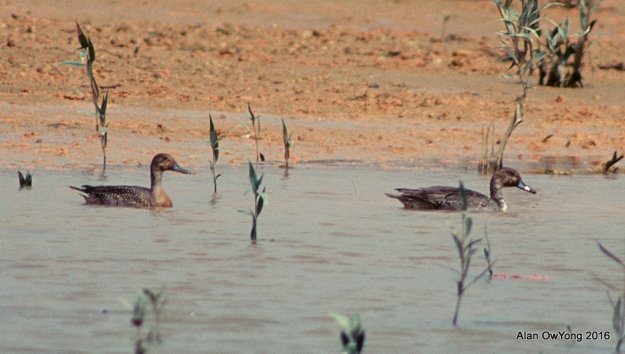 A female (left) and an eclipse male Northern Pintails at Sungei Sembawang taken in Nov 1992.

The Straits Times yesterday carried an article on the sighting of a male Northern Pintail, Anas acuta, at the Sungei Buloh Wetland Reserve on 3rd February 2016. NParks’ Mendis Tan saw a duck with a greenish throat flying across the reserve in the morning but his colleague David Li found the Pintail among the egrets in the evening. This is the first time for the reserve and only our fifth record of this very rare winter visitor. They migrate from North Asia to South and East Asia making rare visits to Malaysia and Singapore

According to “Madge Waterfowl of the World”, Northern Pintails prefer open wetlands avoiding forested areas. They spend the winter at estuarine mudflats, brackish marshes and lagoons. Sungei Buloh Wetland Reserve is an ideal habitat for its stop over. It feeds by dabbling in shallow water mainly in the evening or at night, spending the day loafing on shores and mudflats. Generally shy and wary.

I dug into my slide collection and scanned the above photo of two Northern Pintails taken at the Sungei Sembawang in November 1992. Two males and a female were seen then. This was our fourth and last record. They stayed from 22nd-29th November 1992 and was last seen on 13th December 1992 (SINAV 6.2). Sungei Sembawang was an integral part of Senoko, one of our premier birding sites in the 90s, where over 200 species were recorded.

The sighting at Sungei Buloh also extends the extreme date from 29 January to 3rd February. Lets hope that the newly opened Kranji Marshes will attract more migratory water fowls to stop over here.