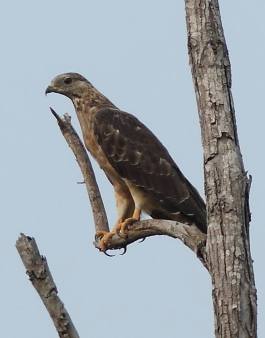 Seng Alvin posted this photo of an Oriental Honey Buzzard taken at the Tampines Eco Green in Singapore Raptors Facebook Group on 25th August 2015. He asked if this is was a juvenile OHB. This simple question set off a lively discussion on how to age and sex the younger honey buzzards.

Tou Jing Yi said that it is not a full adult. Tan Kok Hui agreed based on the paler cere and added that this is a young male orientalis OHB.  Tou Jing Yi then pointed out the grey face and dark iris as features for the male birds.

The Oriental Honey Buzzards migrate down to Singapore around mid September from Southern Siberia, NE China, North Korea and Japan. They are mainly adult birds. The juveniles will follow a month later when we get to see them in late October and early November.

So why are we seeing a migratory orientalis honey buzzard in August? I went to ask Yoshio Yamane-san who helped with the tracking and study of two adults and one juvenile Oriental Honey Buzzards in 2005. While both adults made their way back north in the Spring, the juvenile stayed and spend the Summer in Malaysia (Higuchi et al 2005). He said that the juveniles winter in the region together with the adults but do not follow the adults back in Spring. They stay over and spend the Summer in the region as second year birds. Many will then make their first migration back north in the following Spring as third year birds. Seng Alvin’s OHB could be one of these birds.

I cannot find any literature on why the juveniles summer over the region during their second year. Could it be because of their diet? The larvae of bees, wasps and other insects may not provide enough fat for them to undertake two long migrations within a short period of six months? Since they are not ready to mate in their first three years, there is no point in making the risky journey back but instead spend the time to build up their strength and save energy. 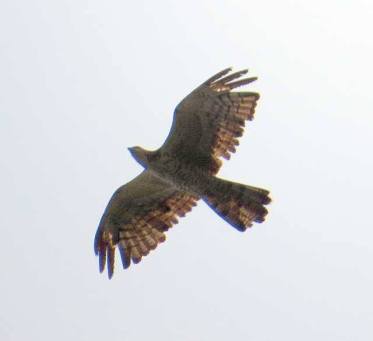 This pale morph Oriental Honey Buzzard (right) was shot by Danny Lau on 7th July 2015 over Hort Park. He identified it as a second year bird, moulting.  An adult will have a dark trailing edge to the wings.  Based on the date, this has to be one of the juveniles that came down during last autumn and have been spending all this time in the region.

Francis Yap photographed another Oriental Honey Buzzard (below) on 5th August 2015 over the Jelutong Tower at the Central Catchment Forest.

It is also not a full adult, but appears to be a second year bird. He reported that it came up from the forest roost, thermal and then flew off in a South-easterly direction.  This is what the Honey Buzzards do during migration. Three days earlier Low Choon How also reported another OHB flying over the Singapore Botanic Gardens in a South-easterly direction. Based on the direction of the flight both appeared to be on an early autumn migration. But at this time of the year the Oriental Honey Buzzards are just starting their migration with the adult birds undertaking this journey first. The juveniles will stay behind in their breeding grounds to build up their strength for another month or so before making the trip in early October. Could they be flying down to Indonesia to continue their stay? Hopefully with so many keen raptor watchers in the field in the coming days and weeks, we will have more information on these Honey Buzzards and answer some of these intriguing question.