On 11 June 2017, the Nature Society (Singapore) Bird Group conducted the second survey to find out which were the commonest bird species on Pulau Ubin. This survey was organized in conjunction with Pesta Ubin which covered a 3-month period from May to July 2017.

A total of 10 teams consisting of 10 leaders and 28 participants took part in this year’s CBQ. Areas in the west, central and eastern part of Pulau Ubin were covered. The routes included those in 2016 with additional routes to cover as much of the island as possible within the allocated time from 8.00 to 10.30 am. The good weather helped and all the teams completed their designated route in the allocated time.

The same MacKinnon bird listing method used in 2016 was again used this year. This method involved recording each new species of birds (seen or heard) until a pre-defined number of species is reached. Once this pre-defined number is reached, a new list is started. Any one species will only be recorded once in the first list but may be recorded again in subsequent lists. For our purpose, we continued to use a list of 10 species before starting on a new list. 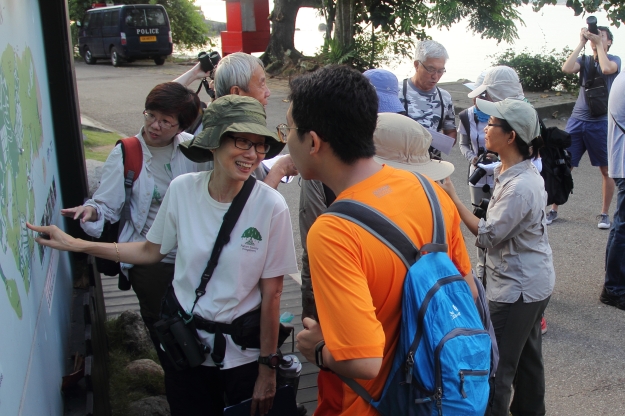 Lee Ee Ling going through the transacts with members before the start of the survey. Photo: Yap Wee Jin.

Table 1 shows the top 20 commonest birds based on the relative abundance indices.

The survey by the 10 teams produced a total of 54.4 lists. The relative abundance index of the birds detected ranged from 0.02 to 0.57. A total of 60 species were recorded during the CBQ. The most abundant species are Common Iora, White-rumped Shama and swiftlets (not identifiable to species). These three species registered the highest relative abundance index of 0.57 and were recorded in 100, 90 and 80 percent of the surveyed sites respectively. Both the iora and shama are very vocal at this time of the year and are easier to detect. This could be a contributing factor for their high score. Swiftlets are likely to be Germain’s or Black-nested Swiftlet but could also be hybrid species from the swiftlet farms in Johor. As noted in CBQ 2016, other censuses conducted by the Bird Group have consistently found the Yellow-vented Bulbul to be a very common bird in most parts of Singapore.

The Common Iora is one of the three most common bird counted in 2017 with 31 contacts.

Last year’s most common bird the Olive-winged Bulbul is sixth this year. The Yellow-vented and Straw-headed Bulbuls are fourth and fifth respectively on the CBQ 2017 list. The habitat on Pulau Ubin which consists of a mosaic of orchards, old rubber plantations and secondary forest are good for omnivorous birds like bulbuls.

A significant observation in the CBQ 2016 survey was the relative abundance of both the Straw-headed Bulbul and White-rumped Shama. Both species continued to do very well on Pulau Ubin but it is critical that the authorities and the public remain vigilant against potential poaching here and in other parts of Singapore.

The White-rumped Shama continues to do well in Ubin with 31 contacts during the survey. The count maybe due to it being very vocal at this time of the year.

As also noted in 2016 it is inevitable that biases exist for all rapid survey and census. The most obvious bias is that this is a rapid one day count lasting only 2 to 2.5 hours. Experience of participants is also a contributing factor with the more experienced participants recording more birds heard or sighted. This survey is conducted at a time where some species may be more vocal than others and most if not all migrants are absent. Another issue involves the detection bias towards species that are more vocal or active at the edges of habitats as the selected routes were along existing roads, trails or boardwalks. But in general, this survey does provide a fairly good picture of the type of common resident birds that you can expect to see on a bird walk on the island in the middle of the year.

Rounding up the top three are the Swiftlets also with 31 contacts.

Table 2 :  Summary of contacts(heard/sighted) and species of birds surveyed during the CBQ 2017

We are glad that there was a six-fold increase in participation. The Pesta Ubin Commonest Birds Quest continued to provide the opportunity to the public to participate in a citizen science project. The data collected over an extended duration could be used to monitor changes to the avifauna of Pulau Ubin and ultimately the state of the environment here. A common bird today may become very rare or even become extinct tomorrow if its habitat is altered irreversibly or destroyed.