August was a busy month as the migrant species continue to arrive. On the 1st, Robin Tan had an Intermediate Egret Egretta intermedia at SBWR. On the 2nd, an Orange-headed Thrush Geokichla citrina was found dead at Bendemeer Road by John Chan, probably after having crashed into the apartment flats. On the 3rd, David Li had a Curlew Sandpiper Calidris ferruginea at SBWR.

Brown-streaked Flycatcher, at Jelutong Tower, on 18 Aug, by Francis Yap

On 13th, a rare Brown-streaked Flycatcher Muscicapa williamsoni was recorded at Pasir Ris Park by “Trust Mind”; See Toh Yew Wai had even better luck, seeing an adult and a juvenile on the 14th; while Francis Yap saw the juvenile on the 15th; Seng Alvin saw it on 17th; and Con Foley had his on the 18th. At the Jeutong Tower, Francis photographed another Brown-streaked Flycatcher on the 18th.

Also on 13th, a Blyth’s Paradise Flycatcher Terpsiphone affinis, first of the season, was recorded at Venus Link by Siew Mun. On 21st, a Common Kingfisher Alcedo atthis was photographed at Jurong Eco Garden by Luke Milo Teo. On 25th, Veronica Foo reported a Marsh Sandpiper Tringa stagnatilis at SBWR in the late morning; while David Tan reported that an Eastern-crowned Warbler Phylloscopus coronatus was found dead at Winsland House.

On 27th, Goh Cheng Teng found a lone Terek Sandpiper Xenus cinereus at Seletar Dam. On 28th, Robin Tan photographed an Eurasian Curlew Numenius arquata at SBWR; See Toh Yew Wai found it on 29th; and Lim Kim Keang reported that the bird was still around on the 31st.

For the residents – Gerals Chua photographed a pair of Stork-billed Kingfishers Pelargopsis capensis mating at Pasir Ris Park on the 3rd; while Luke Milo Teo documented an adult Rufous Woodpecker Micropternus brachyurus feeding a juvenile at the Chinese Gardens. 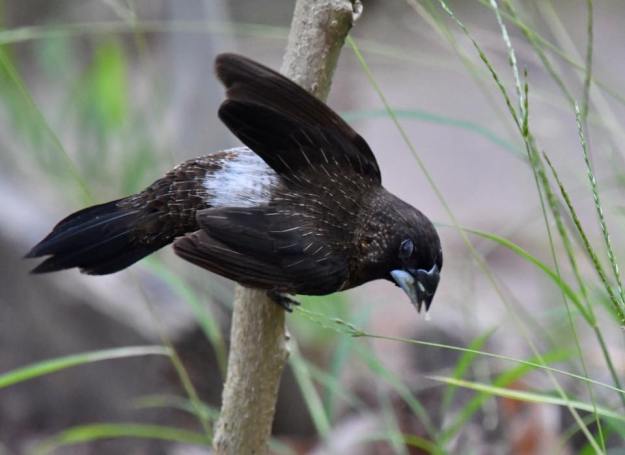 A White-rumped Munia Lonchura striata was photographed at the Chinese Gardens by Ang Siew Sew on the 3rd and seen again by See Toh Yew Wai on the 10th. On the 4th, James Tann recorded a Greater Coucal Centropus sinensis at the southern Ridges near Kent Ridge Park, and Laurence Eu had another of this secretive bird at Dempsey Hill on the 7th. On the 5th, a family of Ruddy-breasted Crakes Porzana fusca with 3 chicks were seen at the Gardens by the Bay by Terence Tan.

On 14th, Seng Alvin recorded 2 usually secretive White-browed Crakes Amaurornis cinerea at Lorong Halus; on 16th Terence Tan photographed one; James Tann also photographed one on the 18th. On 18th, Francis Yap photographed a Glossy Swiftlet Collocalia esculenta at Jelutong Tower, while another was found dead at Lornie Road by Vincent Lao on the 26th.

Malaysian Pied Fantail at Pasir Ris, mid-August, by Harry Geno-Oehlers. This nest was placed on a single horizontal twig. On 18th, the nest was found to have swivelled downwards, emptying the nest of 2 young chicks.

On 30th, NParks announced that a family of Black-backed Swamphen Porphyrio indicus, including 2 juveniles, were seen ‘recently’ near a pond in the core conservation area, marking the 1st evidence of breeding since the opening of the marshes in March 2016. Alan OwYong reported the successful nesting of a pair of Grey-rumped Treeswifts Hemiprocne longipennis at One North Crescent, with the adult still feeding its young as at August. On 16th, Ang Siew Siew photographed a juvenile Pied Fantail apparently begging for food from its parent. Over at Pasir Ris Park, Harry Geno-Oehlers reported that the nest of a pair of Malaysian Pied Fantails toppled over, killing the 2 chicks; Seng Alvin added that it was the 3rd round of nesting. Finally on 31st, Terence Tan photographed a Violet Cuckoo Chrysococcyx xanthorhynchus at Kranji Marshes.

This report is compiled by Tan Gim Cheong and Alan OwYong from selected postings in various facebook birding pages, bird forums, individual reports and extracts from ebird. This compilation is not a complete list of birds recorded for the month and not all the records were verified. We wish to thank all the contributors for their records. Many thanks to See Toh Yew Wai, Francis Yap, Goh Cheng Teng, Gerals Chua, Ang Siew Siew,  Seng Alvin and Harry Geno-Oehlers for the the use of their photos. Please notify alan.owyong@gmail.com if you find errors in these records. 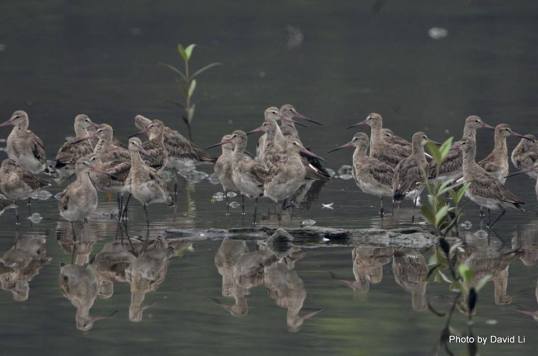 The wetlands at Sungei Buloh came alive this September with the arrivals of three uncommon and sought-after shorebirds. David Awcock started the ball rolling with the sighting of a lone Black-tailed Godwit, Limosa limosa on the 7th. Timothy Lim managed to get a group photo of about 30 the next day. David Li, Researcher Officer the Reserve did a count and came out with a total of 32. The highest count were 60 here on 9 October 1994 ( Iora 1). 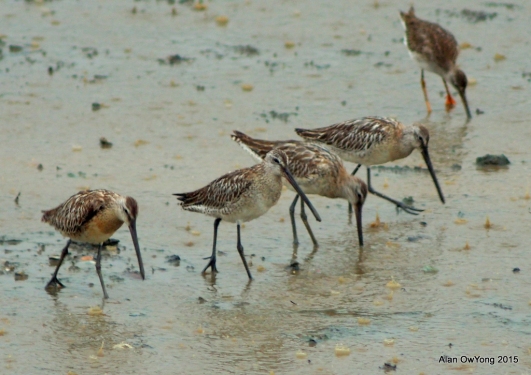 As the excitement subsided, John Ang photographed a single Asian Dowitcher Limnodromus semipalmatus on the 19th. This is listed as a rare winter visitor and passage migrant to our shores but have been sighted in the last few years. This was followed by a photo of a Eurasian Curlew, Numenius arquata taken at Hide 1D by Ben Lee the next day. He posted it on the WildbirdSingapore e-forum. Most of the sighting of this Curlew were at our sandy coasts like Con Foley’s sighting on 22 Sept 2007 and another by Lena Chow, Jimmy Lee and Gerard Francis on 14 November 2010. Both were at the Changi Cove. Frankie Cheong had not one but three records at newly reclaimed land at Pulau Tekong ( 18.9.10, 4.10.10 & 22.2.12).

Ben Lee’s sighting brought Francis Yap, Zacc HD, Robin Tan and Alan OwYong to the main hide the next Monday morning. Fortunately we were joined by David Li and Mendis Tan later. Mendis was the one who picked the Curlew among the flock of Whimbrels just as we were about to give up.

A most unexpected photo of both the Eurasian Curlew and the rarer Asian Dowitchers in the same frame.

Earlier Robin was photographing the Whimbrels when he found the Asian Dowitcher. We had a pleasant surprise when four birds were seen. In 2013, we had the highest count of 7 birds on 9th Sept, beating the old high count of 6 birds on 7th Sept 1980. Then heavy rain fell and to our delight, they all came down from the bund to feed. This gave all of us the opportunity of getting better and nearer shots, but the low light was not ideal. But we were compensated with precious photos of both the Curlew and the four Dowitchers in one frame. Everyone except Alan got their lifers for the day with Francis getting his long awaited global lifer, the Eurasian Curlew. PS. David Li made a very interesting observation. All these birds were juveniles. Could it be that they being younger need to have a stopover for a rest and refuel. The Eurasian Curlew was still around at the main pond on the 22nd.

This photo was submitted on the 23rd clearly showed that there were seven Asian Dowitchers at SBWR on 21st Sept. This equals the highest count of seven birds in 2013.

Reference: The Avifauna of Singapore. Lim Kim Seng 2009. A field Guide to the Waterbirds of Asia. 1993 Wild Bird Society of Japan. Thanks to David Li for the use of his photo and the alerts from David Awcock, John Ang and Ben Lee. Also thanks to Robin Tan and Mendis Tan for picking out the Dowitcher and Curlew on 21st.