In February, 81 raptors of 11 migrant species were recorded. The raptor of the month is undoubtedly the vagrant Himalayan Vulture Gyps himalayensis photographed by Francis Yap at Bukit Timah on the 8th. On the 12th, two scarce raptors were recorded: a Common Buzzard Buteo buteo photographed at Kent Ridge Park by Nathan Johnson and a Black Kite Milvus migrans (lineatus) photographed at Pulau Ubin by Wang HM. A grey morph Oriental Scops Owl Otus sunia photographed at Mimosa Walk by Heather Goessel on the 14th was a good surprise. 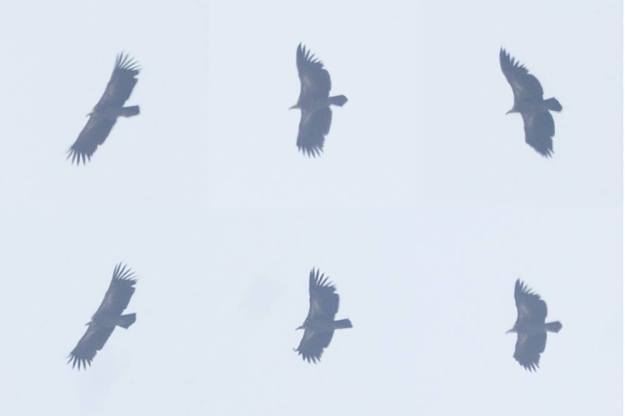 Nine Jerdon’s Bazas Aviceda jerdoni continued to winter at the Lorong Halus area, three were spotted at Changi Business Park and one at Bishan Park. Of the 28 Black Bazas Aviceda leuphotes recorded in the month, 18 were fittingly seen on the 18th by Goh Cheng Teng at Kranji Marshes.

The female Chinese Sparrowhawk Accipiter soloensis at Ang Mo Kio is still wintering there, while single occurrences were recorded at Punggol Promenade (1st),  Upper Seletar (6th) and Lorong Halus (17th). There were also four Japanese Sparrowhawks Accipiter gularis during the month: a female at Bukit Timah (9th), an immature at Jelutong Tower (21st), one at Pasir Ris Park (23rd) and another female at Tampines Eco Green (26th).

Among the five Peregrine Falcons Falco peregrinus recorded, one was the ernesti race recorded on the 17th at Jelutong Tower by Goh Cheng Teng and Lim Hong Yao. Four Western Ospreys Pandion haliaetus and 19 Oriental Honey Buzzards Pernis ptilorhyncus rounded up the migrant raptors for the month. 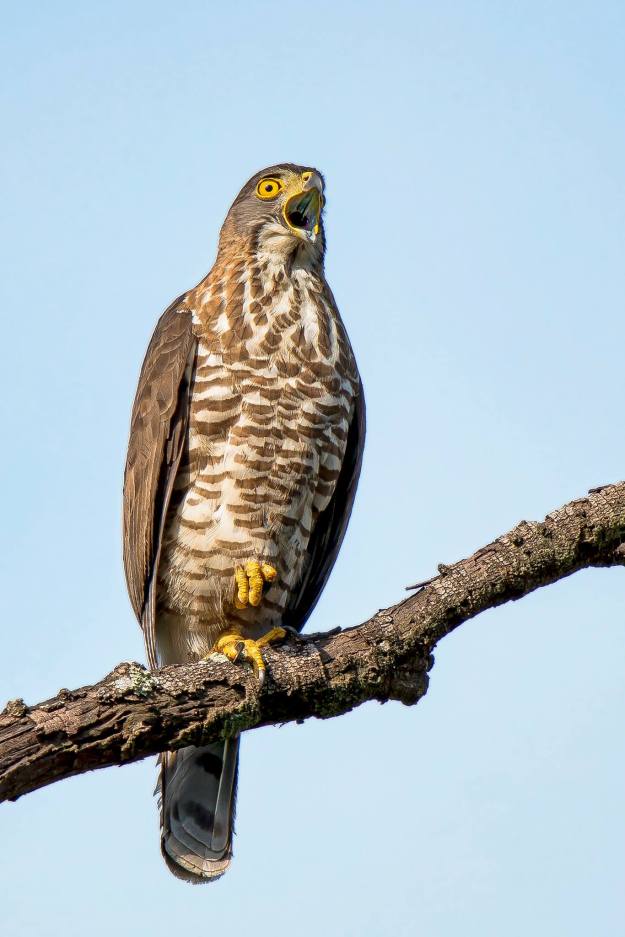 February was a pretty good month for the Crested Serpent Eagle Spilornis cheela, with records from Pulau Ubin on the 4th, Kent Ridge Park on the 8th and the long-staying individual at Malcolm Park. Also good as a daytime record was an Eastern Barn Owl Tyto delicatula photographed by Deborah Friets at Satay by the Bay on the 19th.

There were two breeding records for the Crested Goshawk Accipiter trivirgatus: a pair at the Botanic Gardens with a single chick that fledged on the 4th and another pair at Ang Mo Kio that had a more eventful time as the nest was reported to have been blown down by strong winds together with the chicks. Fortunately, ACRES was alerted and the chicks returned to the parents which continued to look after them till they fledged. Interestingly, a juvenile Crested Goshawk caught a young monitor lizard (probably a clouded monitor) at the Botanic Gardens on the 3rd.

There were also two breeding records of the Buffy Fish Owl Ketupa ketupu: a fledgling at the Botanic Gardens late in the month, and another fledgling at Sungei Buloh Wetland Reserve with its parents on the 26th. The other sedentary raptors recorded included seven Grey-headed Fish Eagles, eight Black-winged Kites, seven Changeable Hawk-Eagles, and the common White-bellied Sea Eagles and Brahminy Kites.

Many thanks to everyone who had reported their sightings in one way or another, and also thanks  to Felix Chan, Michael Phua, Francis Yap and Lian Yee Ming for the use of their photos.