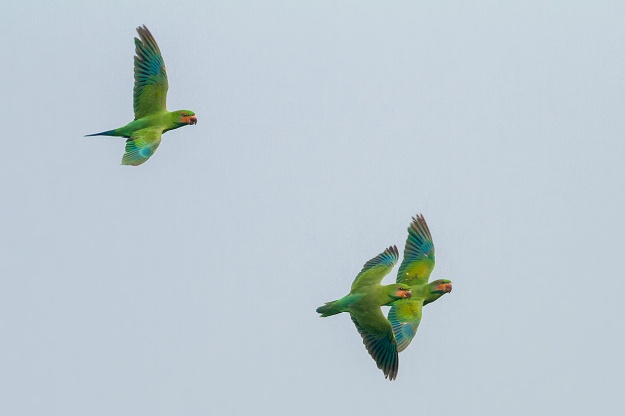 Long-tailed Parakeets flying across CCNR photographed at Jelutong Tower by Francis Yap. They made up 58% of the total counted. 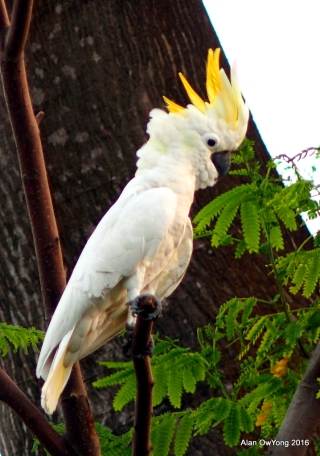 The smaller Yellow-crested Cockatoo where 8 were counted.

The World Parrot Count was initiated seven years ago by Michael Braun and Roelant Jonker from the parrot researchers’ group of the International Ornithological Union (IOU). A key objective of the study was to document the status and abundance of feral and non-native parrots in urban environments globally where populations are established. Being part of this study provides an excellent opportunity for us to also monitor native parrot abundance and diversity in Singapore beyond our nature reserves. Given that some species such as the non-native Red-breasted Parakeet (Psittacula alexandri) have increased in abundance across Singapore, it is also timely to identify areas where these species are concentrated and their roost sites.

Coordinated annually by the Bird Group since 2011, this year’s Parrot Count took place on 25 February 2017. 17 sites across mainland Singapore were counted this year. This year’s total of 2621 parrots of 9 identifiable species is higher than the 2,483 parrots of 8 species recorded last year.

As was the case over the past 3 years, the well-wooded Mount Rosie was the most species-rich site, with six species of parrot recorded. Bottle Tree Park, a site first surveyed in 2015, was once again the top site in terms of total abundance, with 719 individuals from four parrot species recorded. The Long-tailed Parakeet (Psittacula longicauda) was the most numerous parrot recorded during the count, with a total of 1,521 individuals seen. However, this was a continued decrease from the 1,837 individuals last year and the high count of 2,059 observed in 2015. This constituted 58% of all parrots recorded during the count. 903 Red-breasted Parakeets were also recorded, making up the bulk (34.5%) of the remaining parrots recorded. Other species recorded include small numbers of Tanimbar Corellas (Cacatua goffiniana), Coconut Lorikeets (Trichoglossus haematodus), Rose-ringed Parakeets (Psittacula krameri), Blue-crowned Hanging Parrots (Loriculus galgulus) and Yellow-crested Cockatoos (Cacatua sulphurea). 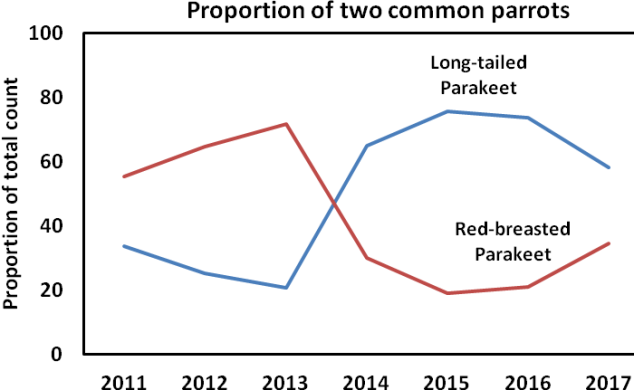 During the census, parrot numbers peaked between 7 pm and 7.30 pm where 1,669 parrots were counted.  As shown in recent counts, the largest parakeet flocks were mainly observed at last light, with counters at many sites managing to observe the noisy spectacle of flocks of parakeets returning to their roosting trees just before complete darkness. 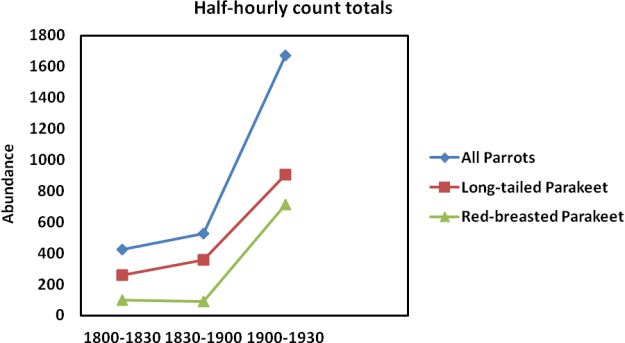 Of particular interest is the continued decline in the total number of Long-tailed Parakeets recorded during the Parrot Count since 2015. However, counts over the past three years at major staging and roosting sites around northern Singapore show no discernable trends, with numbers at the Bottle Tree Park showing an overall increase since 2015 while the staging areas at Springleaf Nature Park have been quite stable over the past two years following a decline between 2015 and 2016 (Figure 1). It is possible that instead of a genuine decline, changes in the foraging and roosting habits of parakeet flocks may be responsible for a lower number of individuals counted overall. Hopefully, continued data collection in the years ahead will provide a clearer perspective of these trends. 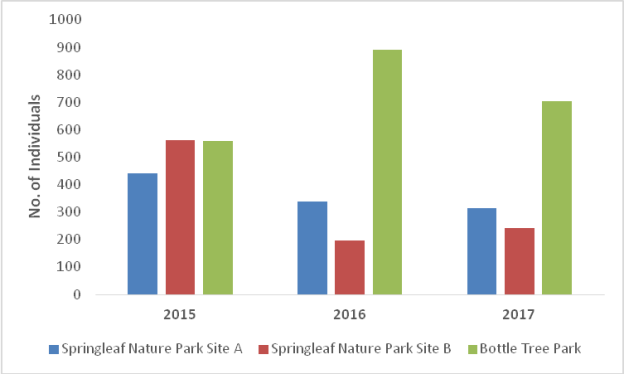 Figure 1: Numbers of Long-tailed Parakeets recorded at three sites in northern Singapore over the past three years.

Conversely, preliminary analysis of two Red-breasted Parakeet roosting sites over the past three years show less variation in flock size year-on-year (Figure 2). Given that the species is now widespread and common in Singapore, it is clear that many other roosting sites are present throughout urban Singapore and are not being counted. This is evident from a new roost site counted for the first time at Jurong West that contained close to 500 individuals, effectively doubling this year’s count relative to the past two years. It is hoped that birdwatchers will continue to report parakeet roosts within their neighbourhoods, so that a more complete picture of Singapore’s Red-breasted Parakeet population can be obtained. 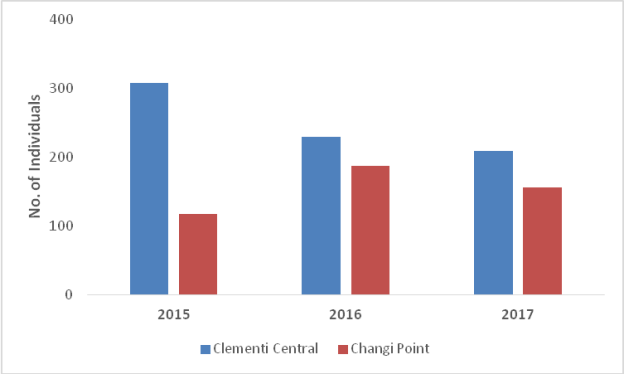 Figure 2: Numbers of Red-breasted Parakeets recorded at Clementi Central and Changi Point over the past three years.