October is the month when raptor migration starts to pickup and more than six hundred raptors of 9 migrant species were recorded. In terms of numbers, Oriental Honey Buzzards made up the bulk with 562 individuals, and the first influx of 246 birds was recorded on 16 Oct at Tuas South. There were 38 Japanese Sparrowhawks, mostly on passage, followed by 13 Chinese Sparrowhawks.

A Peregrine Falcon recorded at Lorong Halus on 29 Oct and an Osprey recorded at Kranji Marshes on 24 and 25 Oct completed the line up for the month. Surprisingly, there were no records of the Black Baza this October! 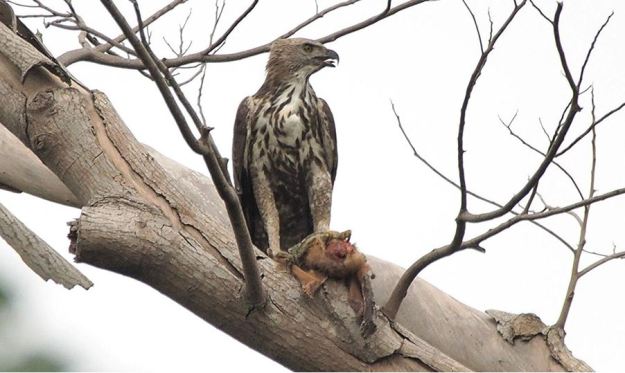 A rare image of a Changeable Hawk-Eagle with a Colugo in its talons was captured at Dairy Farm Nature Park on 1 Oct by Siew Mun. The rare Crested Serpent Eagle made a number of appearances at Kent Ridge this month, while a single record was reported at Sengkang Riverside Park. Kent Ridge and the nearby Telok Blangah Hill continued to be reliable areas to see the Crested Goshawk; additionally, there was a single record of an adult from Tagore/Lentor forest on 1 Oct. Also notable was an adult torquatus OHB photographed on 11 Oct by Marcel Finlay in the Central Forests.  The other resident raptors recorded included the Black-winged Kite, Brahminy Kite, White-bellied Sea Eagle and Grey-headed Fish Eagle.

Many thanks to everyone who had reported their sightings in one way or another, and especially to Adrian Silas Tay, Siew Mun, Rey Aguila and Francis Yap for the use of their photos.