Our brief encounter with the Buffy Fish Owls at Singapore Botanic Gardens.
by Henrietta Woo.

Time: From 1918 hours till nightfall

Pei Shuan and I had just left the office and were making our way to the Evolution Garden when two large-sized birds abruptly landed in the tree above us while calling. We thought it might be the Red Jungle Fowls, but turning the corner, the birds revealed themselves to be Buffy Fish Owls. Both continued to vocalise, one more so frequently than the other, uttering a relatively soft “yiiii” (like a squeaky chair, for lack of a better description) each time. The other owl answered sporadically with a louder and harsher “yiooorhhh”. I am guessing that the former is a subadult; the plumage differences seem rather minute, however. Both kept close to each other. 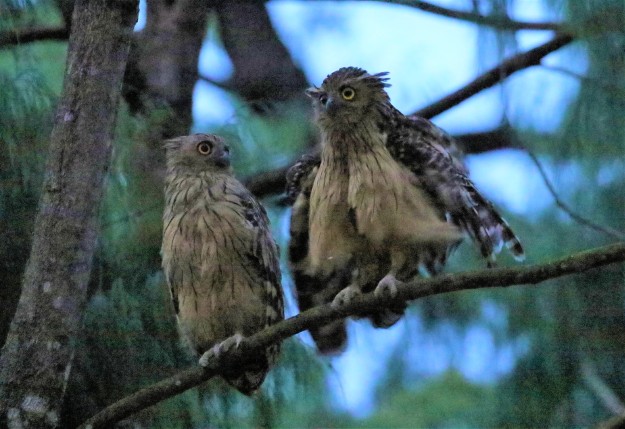 While this was happening, Ruici who was at Botany Centre observing the Brown-chested Jungle Flycatcher immediately rushed over and joined me about 5 minutes after Pei Shuan left. At this time, the owls had become more active, flying across the path to another tree and calling more frequently. The pair thereafter flew across the carpark, to the trees directly in front of the HQ, where we observed was a third owl. Soon after, two of the owls flew across the carpark one after the other back to the Evolution Garden. One of them was carrying a small branch/large twig from the Araucaria tree it had been perching in. The two owls in the Evolution Garden started to vocalise, seemingly coaxing the third individual (subadult?) to join them.

I had my camera (thankfully!) with me, and managed to squeeze off a few shots before night fell. We also were able to take a few recordings of the owls vocalising and will eventually upload onto xeno-canto. This brief encounter with these Buffy Fish Owls while unexpected was most exhilarating!

The Red-legged Crake Raliina fasciata is an uncommon resident in NE India, across mainland South-East Asia, Philippines, Borneo, Sulawesi and the Sundas. Singapore and West Thailand are the two places in its range where they are more easily seen. The northern population migrates and winters to South East Asia. On 13 June 2003, a Thai birder Prapoj Rukruenreang posted a set of a nesting Red-legged Crake with at least 4 eggs in it which he took at Kaeng Krachan N.P. The nest is built on a grassy base on the ground with dry leaves and small twigs spread on top of it. 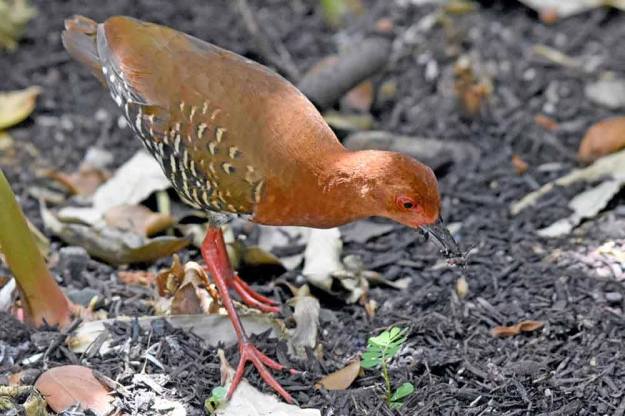 In Singapore, they are an uncommon resident and winter visitor found in forest edges and nature parks away from swampy places. It was once considered rare until a family was seen bathing at the drain next to Tyersall Avenue and its vocalisation known.  The first breeding record was from Hume’s Heights where an adult was seen with three chicks on 16th January 1985. Families with chicks have since been seen in various parts of the Singapore Botanic Gardens and nearby Bukit Brown for the decade or so but not the actual nesting. The breeding season is in January, March, May to July and September based on sightings of the adults and chicks. In mid October, I chanced upon a nest at the Singapore Botanic Gardens with eggs in it. This is the first documentation of its nesting in Singapore.

Four of the five off-white eggs that I chanced upon at the Helliconia Gardens when I was photographing the sunbirds.

I was photographing the sunbirds at the Helliconia Gardens at the Botanic Gardens when I chanced upon a nest with five off-white eggs in it. They must have been laid a day or two ago according the the workers there. The eggs were left unattended and no crakes were seen around the nest that day. So I was not sure if it belonged to the Red-legged Crakes. The bush is about 2 meters away from the concrete path where visitors to the park frequently used. Surrounding this bush are groves of various species of Helliconia plants.

The nest is built on the inside Fire Bush less than 2 meters from the walking path but well hidden from sight by the Helliconia groves.

The nest is about knee high from the ground. You can just see the Crake sitting on the well hidden nest in the Fire Bush.

These groves of Helliconias provide an ideal place for the adult crakes to forage safely under cover. From one of the videos, they were seen picking out earthworms from the ground in between the stems of the Helliconia plants.

The nest itself is an untidy collection of dead leaves from the plants nearby piled on top of each other forming a depressed center for the eggs. The Helliconia leaves made up the majority of the leaves. The stem of one of the leaves can be seen sticking out of the nest giving it an unfinished look. In between there were small twigs and other dry plant material. It is about 25 cm long and 25 cm wide and 4 cm thick. It is not built on the ground but about knee high on the branches of a Fire Bush Hamelia patens, a path side ornamental plant.. At the center of the nest a few very small twigs seem to be used to give support to the eggs.

The nest is made of piles of dried leaves and small twigs on the Fire Bush, an low ornamental plant commonly used for edge landscaping.

The nest can only be seen if one steps a little inside the flower beds and not from the path. The Helliconia plants cover any line of sight from the other side. This is the first description of its nest in Singapore and very different from the one in Thailand. It would appear that they will use whatever nesting material that is available nearby and adapt the position of the nest to the location.

The nearest water is the Symphony Lake about 30 meters down the slope. On the upslope is the service and visitors road by the side of the Rain Forest.

On October 15th I saw a crake on the nest and knew it was active. I spent about 60 hours monitoring the nest over the next 19 days.  Another five hours were spent by a birder friend when I was away for a few days. (I later found out that another birder, Roberta Cheok was also monitoring this nest at around the same time on her own).

First saw the Red-legged Crake on the nest on the 15th October and knew that it was active.

For the first couple of days the nest was sometimes left unattended but from October 18th there was always a parent incubating the eggs. Both parents were involved in the incubation, one would be on the nest and the other foraging nearby undisturbed by human traffic. They kept totally quiet facing either the path or into the undergrowth but were alert to what was going on around them. A monitor Lizard was seen sniffing around but left the eggs alone, as did a squirrel.

During this period I got a great video of an adult stamping up an earthworm from the ground near the nest. After letting it wriggle around it pecked at it and gobbled it down. Earthworms seem to be a major part of the diet but I also saw crakes eating insects and a video by Lena Chow shows a small snake being eaten. The choice of nesting around the Helloconia groves may be due to the availability of the earthworms under the soft soil. On 28th October, a very hot afternoon of 33 degrees my birder friend saw a parent standing in the nest over the eggs possibly fanning the eggs with its wings maybe to regulate the temperature. Its bill was open as it was also trying to cool itself. It did this for over half an hour and did not sit on the eggs during the whole time.

3rd November. First saw a crack on one of the eggs on the 20th day of monitoring.

On the afternoon of November 3rd,  the 20th day since I first came across the nest and eggs I saw a crack on one of the eggs. The parent was pecking around the egg, I wasn’t sure if it was trying to assist. About an hour later the first chick hatched and popped up its head to greet the world before snuggling under the parent. 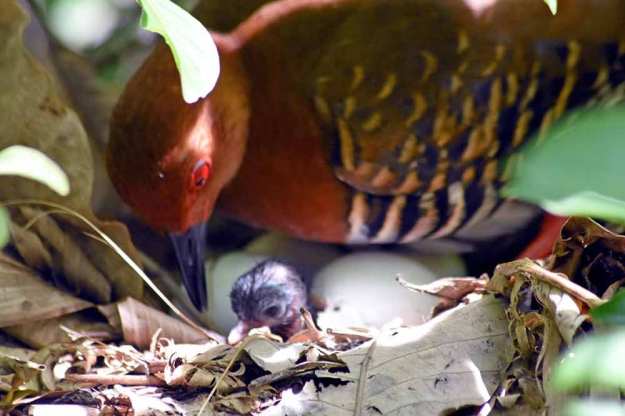 I later found that a second chick hatched at 5 pm. The worker said that he found the first chick on the ground and put it back to the nest at approximately 3pm. My birder friend went by at around 6pm to take a look. At first there were no signs of the chicks but it appeared briefly as a small black furry ball. At around 7 pm in failing light, the parent bird was observed to be pecking frantically all round the nest. After a few minutes of pecking, it suddenly flew out of the nest in a hurry. On closer inspection, he saw a swarm of large black and brown ants had invaded the nest most likely attracted by the remains of the eggs. They were all over the nest and eggs. Three eggs remained unhatched with one empty shell.

The nest was invaded by ants a few hours after the first two chicks hatched. Both parents and chicks escaped leaving three eggs unhatched.

The chicks must have got out with the parent as none of them were in the nest. Past literature suggests that crake and hen chicks are precocial and were able to fend for themselves once hatched. This has to be nature’s way to save them from predation since they nest so close to the ground.  Soft calls presumably from the parent can be heard nearby. The parent maybe trying to gather the chicks together in the dark. Who would have thought that a small ant is the biggest threat to their nesting?
Next morning November 4th I found two hatched eggs in the nest and one egg on the ground. There were no chick carcasses. The parent were not in the nest but were scurrying around nearby. It would seem that the last three eggs hatched between 7 pm last night and 9 am this morning. I have no idea what happened to the chicks. I hope that their survival instincts got them to retreat to the deeper forest cover up the road and do their foraging there until they are big enough to fend for themselves.

From this single nesting observation I was able to make a few interesting and perhaps new information about their nesting nesting behavior that may help with its conservation.

A note on Red-legged Crakes (Rallina fasciate) in Singapore. May 2017 Marcel Finlay.

‘Notes on the Distribution and Vocalizations of the Red-Legged Crake (Rallina fasciata) in Singapore’ – Singapore Avifauna Volume 23 No 4 (Nature Society Singapore Bird Group, 2009)

Pocket Checklist of the Birds of the Republic of Singapore by Lim Kim Seng. (Nature Society (Singapore), 2007)

A Photographic Guide to the Birds of Malaysia and Singapore by Morten Strange (Periplus, 2002)