Lim Kim Seng reported the sighting of the Chinese Hwamei at Siloso on the 19th December.  There has been no reports of this naturalised laughingthrush for a good part of the year. This led to Tuck Loong, Esther Ong and others to go and look for it on 23rd December.

They not only got the Chinese Hwamei but hit the jackpot when Tuck Loong spotted a small cuckoo perched high up on a high bare tree. From some of the early photographs taken, it looked like a possible candidate for a female Asian Emerald Cuckoo Chrysococcyx maculatus.

Our Christmas present the female Asian Emerald Cuckoo turning up at Sentosa on 23rd December.

Subsequent photographs obtained the next day confirmed their finding, effectively giving the whole birding community a timely Christmas present. All those who made the trip to the Siloso Skywalk over the following week went home happy with their tick.

Ticking our presents, all the happy birders and photographers at Siloso Skywalk on Christmas Eve.

The bare tree in question is the Deciduous Fig Ficus superba, a fig species known to shed its leaves periodically. When the new shoots and leaves started to sprout, the Tussock Moths presumably the Clearwing, Perina sunda took full advantage of this by laying thousands of eggs on the tree. The result was an outbreak of it’s caterpillars. There were so many caterpillars that large congregations of them were to be seen on the ground, railings and nearby structures. 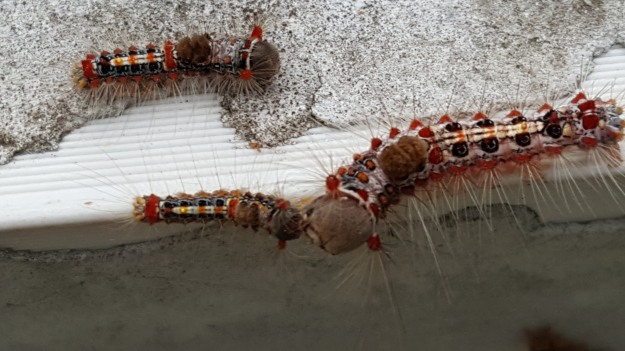 The caterpillars of the Tussock Moths on the Ficus Superba attracted five species of cuckoos, an occurrence we  not witnessed before.

It was this massive supply of food in the form of tussock moth caterpillars that attracted the cuckoos. The Asian Emerald Cuckoo, a rare migrant to the Malay Peninsula, naturally caused the most excitement as this would otherwise be the second record of the species for Singapore.  Another female cuckoo was sighted on the 29th December, and concurrent observations of both individuals confirmed that there were at least two Asian Emerald Cuckoos around, which is unprecedented! Other cuckoos partaking in this caterpillar feast included at least two Large Hawk Cuckoos, two Indian Cuckoos, two Chestnut-winged Cuckoos, and one Hodgson’s and Malaysian Hawk Cuckoo each. Other uncommon migratory birds seen in the secondary forest around the site included a Crow-billed Drongo, at least two Yellow-browed Warblers and a first winter male Blue-and-white/Zappey’s Flycatcher (Cyanoptila sp.).

Our first record of the Asian Emerald Cuckoo was a sub-adult female and juvenile observed at Seletar Reservoir Park on 31st May 2006. K.C. Tsang was the one who photographed them. Some of the diagnostic features were unclear in the photographs which resulted in conflicting identification answers from regional bird experts even after some consultation. The deliberations and discussions at the Records Committee went back and forth for two years before it was eventually included in the official NSS Checklist as a national first. There were two earlier records of females, both were turned out to be mis-identified Violet Cuckoos.

The Asian Emerald Cuckoo is widely distributed across the lower hills of the Himalayas (where it occurs as a summer visitor), eastward to southern China (Yunnan north to Sichuan) and much of continental Southeast Asia. There are few records in the Malay Peninsula and elsewhere in the Greater Sundas (e.g. Sumatra) where it probable occurs as a rare non-breeding visitor during the months of the northern winter.