Picking up from where we left off in the previous article about the decline of our native seed-eaters, I spent a morning at Lorong Halus trying to take a count of our seed-eaters. I limited myself to the birds I have listed in my previous article. I chose this narrow strip of land along Sungei Serangoon stretching from Lorong Halus Bridge to the barrage. Count was taken between 8:00am to 9:00am

From the results you can see I have only estimated the number of Baya Weavers. Its the nesting season and birds were in and out of the nests making estimation difficult. I assume a higher number than seen. They seem to be doing well during based on number of nests observed.

The Golden-backed Weavers came in second with 11 birds (4 breeding males). I observed quite a number of nests, with one tree holding 8 nests in various stage of completion. The males were in breeding display and calling the females, and mending/building their nests.

Golden-backed Weaver’s Nests. There were 8 counted in this particular tree (circled red)

The Common Waxbill came in at 5 birds, of which 1 bird was observed to be carrying nesting material but I was unable to photograph that particular one. It is in line with my observation that this species is one of the commonest waxbills around. 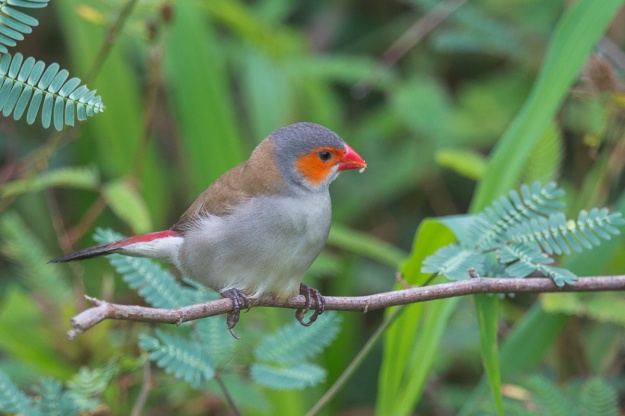 What was more interesting was the absence of the Scaly-breasted Munia, normally the most common munia species around.

It is clear that at this stage, the African seed-eaters are at almost equal numbers to our resident species. This is in line with my previous encounters as well as the argument of my previous article. Also relevant is the observation of large scale nest building by the Golden-backed Weavers and a possible nesting activity of the Common Waxbill. A more comprehensive bird survey will be the next goal.

Note: All photographs were taken on day of survey.