On 21st April 2017, I was birding around the limestone hills in Ipoh when I saw a pair of large birds, which I thought were eagles or owls, flying and landing on the cliff sides. But it turned out to be a pair of Oriental Pied Hornbills instead. When I zoomed in with my scope, I was shocked to see that the male was carrying an egg in its beak. It then carried the egg into a big cavity after the female had inspected it. They both came out after a short while and flew off together. I was thinking that they may have stolen some other bird’s egg and hiding it there as I have seen this pair on this side of the cliff before.

In less than 3 minutes, both flew back again with the male was carrying another egg in its beak. They are moving their nest! I was stunned! They were also surprised to find that someone was watching them moving their eggs to a “safer” place.

A week later on 28th, I saw the male holding a feather outside the nest for a while before flying off. The female was no where to be seen. While both were away Rock Pigeons, Asian Glossy Starlings, Eurasian Tree-sparrows and Jungle Mynas were hanging outside their nest.

On the 30th morning I went back to check on them. I saw the male flying back to the cavity alone calling loudly, rested for two minutes and then perched on a branch nearby. It later flew back to the “nest”, stay inside for a minute or two and flew off to the Durian plantation across the road. I thought that it may be carrying the eggs back to its previous nest but I cannot see any eggs in its beak.

I returned in May and June weekly to check on their progress, spending a few hours each time. Unfortunately they were not around anymore.  I cannot draw any conclusion from this observation except that they are removing its eggs from one nest to another place, which turned out to be a cliff cavity instead of a tree hole.

How exciting!!! I have never heard of any hornbill removing its eggs from a nest and placing them in another cavity elsewhere, especially unexpected, except at the very start of incubation, since the female thereafter should begin her flight feather moult and so become flightless. I did received one unpublished report of this species very likely using a cavity in a limestone cliff in southern China for nesting (that I included in my 1995 book), and several other hornbill species, including Great Hornbill, have been reported nesting and sealing up cliff cavities. Obviously you will continue to watch your site to see if anything develops (although the cavity does to look a good one to try and seal), and it would be lucky if you could try and guess and/or find the original cavity from where the eggs were taken (and if it was in a tree or in another cliff site).

The eggs size and colour looks like it is their eggs, rather than from some other bird’s nest that they may have robbed. Even if they did rob it, I also know of no hornbill hiding food for later use (called ‘caching/ making a cache’ for raptors).

A third, even less likely, idea is that may be these two birds are helpers to a third that is in the cavity they visited, but that too seems unlikely if they both went in the hole together.

One of the joy of birding is to observe behaviour of birds in the field and then having done so, be educated by a fellow birder as to what it all meant.

I had the opportunity to observe a family of Oriental Pied Hornbills (Anthracoceros albirostris) flying towards a kampung house at Pulau Ubin. One of the adult proceeded to land on a large papaya tree. This tree happen to have one ripe papaya fruit.

Soon enough the hornbill dug into the fruit itself and then retrieve the flesh using its large bill. It then proceeded to flip the morsel up and then with the mouth wide open, swallowed it whole. It did this repeatedly after obtaining a solid morsel.

This method of feeding is call “ballistic transport feeding” and was just been discovered recently. Using high speed cameras, researchers have discovered that hornbills, toucans and cassowaries all have a unique way of eating, where food is tossed upwards, and on its way down, the bird open its “mouth” (from the tips of the bill to the pharynx) and the food is then swallowed whole. All this is accomplished without the tongue getting involved, which is a unique adaptation for swallowing large and variable sized food. Imagine that these birds do not taste, nor grind their food before swallowing. 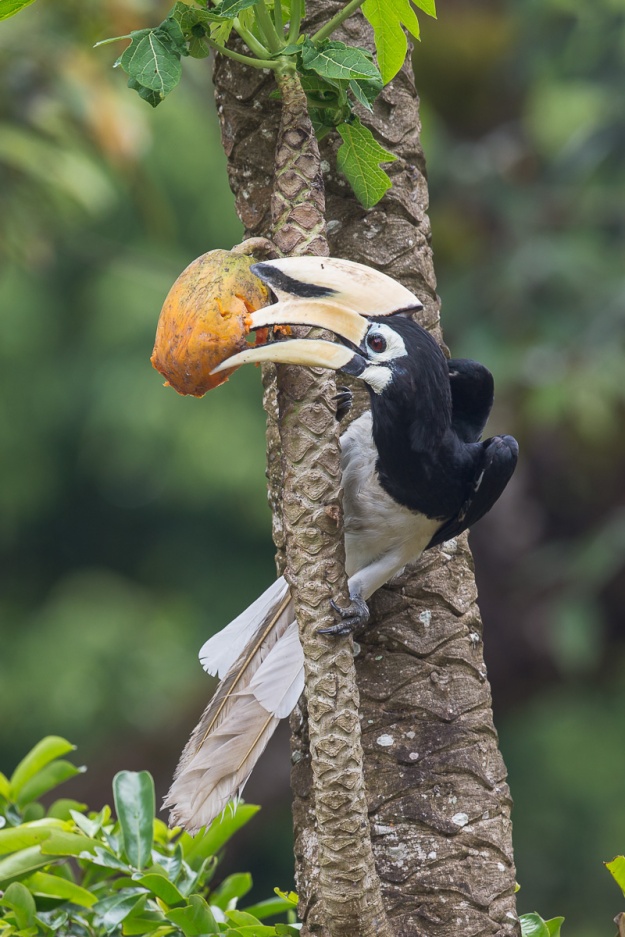 The hornbill using its powerful bill to tear into the ripened papaya fruit.

The flip and swallow routine caught in action

A closer look at another instance. Notice the shape of the morsel is different.

Yet another instance, this time at a different, steeper head angle.

Next frame, just enough to capture the morsel going down.

After one side is done, it goes for the other side. A messy eater.

In between feeding time.

All the while, the juvenile is perched quietly just below the papaya tree. As it has the same pose, you can compare its relative proportion.

Soon after these photos were taken, a group of weekend cyclist came by a bit too close. The whole family flew off to another location, and the papaya was left half eaten.

In summary, we know that Oriental Pied Hornbills like ripe papaya fruits, they tear into the fruit using their powerful bill to retrieve morsels of flesh, are messy eaters and then use ballistic transport to feed themselves. 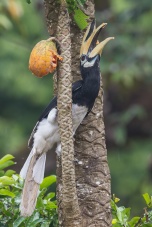 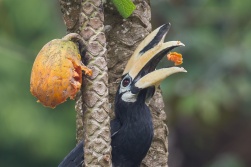 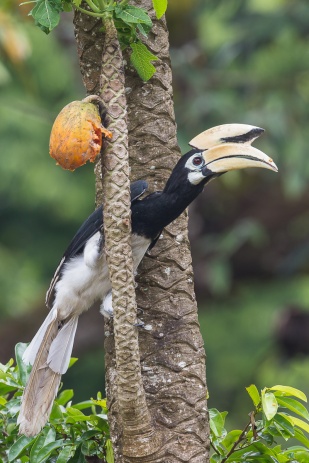 This post was originally written in my blog at: https://fryap.wordpress.com/2014/05/26/oriental-pied-hornbill-ballistic-transport-feeding and expanded upon.