The Zitting Cisticola, Cisticola juncidis, formerly known as Streaked Fantail Warbler is listed as a common resident occurring in grasslands, reed beds and open fields throughout mainland Singapore. It has a wide global range from Southern Europe, Africa, Asia and SEA to Australia. The sub species in Singapore is the Malaya.

It is not listed in the “Vanishing Birds of Singapore” (Lim Kim Seng 1992) or “The Singapore Red Data Book” (Second Edition 2008), but was included in the recent “Singapore Birds on the Brink” exhibition as they are under threat because of diminishing grasslands. 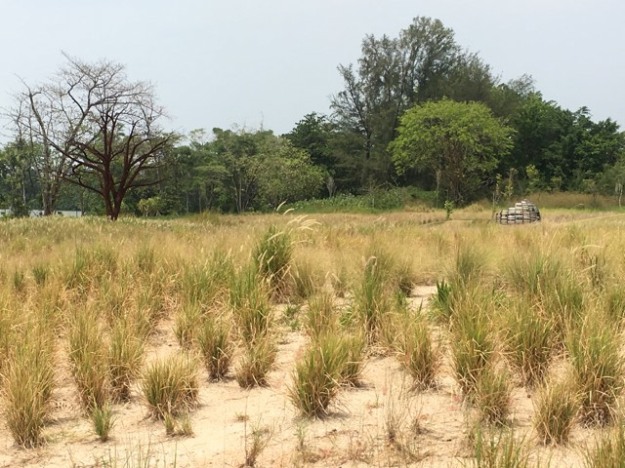 As part of the rejuvenated Jurong Lakeside District, the lakeside gardens were remodelled to include a big expanse of open rolling grasslands of Pennisetum ( Lee Kai Chong) and African Tail Feather Grasses ( Sim Chip Chye). Insects such as grasshoppers and crickets are thriving in the new habitat, a wonderful attraction for the resident insectivorous Zitting Cisticolas.

With the abundance of insects like this grasshopper the Zitting Cisticolas have no problems feeding three to four chicks at the same time.

The Zitting Cisticolas at Jurong Lake Gardens were seen gathering nesting materials from as early as 14 July. It became apparent that their nesting was successful when the adult pair started feeding their first brood recorded there from 19 July. While observing the first nest, there was a flurry of activities from as many as four other Zitting Cisticolas in other parts of the grasslands.

Parent bringing back grasshoppers for it chicks. The nest is hidden deep in the middle of the grass bush. Photo: Norhafiani A. Majid.

On 8th August, another nest was found in a more open spot. Three chicks were visible and appeared to be two to three days old. The nest is a small cup of leaves and grasses wound together with cobwebs deep inside the grasses. It is not visible from the side. The male is the nest builder and invites the female in with a special display ( Wikipedia).

Tender moment of the parent feeding a grasshopper to its chick captured. Photo: Norhafiani A. Majid.

In the days that follow, the cisticolas can be seen flying up and down regularly and bringing back food for the young. The food was mostly grasshoppers and crickets as expected. An interesting observation was that the parents would land a few meters away to survey its immediate surroundings before hopping back to its nest. They were able to find the nest even when they landed at different spots.

Parent busy bringing back food to feed its hungry chicks.

On 21 August the nest was empty.  We had a note from Lee Kai Chong that the chicks fledged on 20 August. Assuming that the chicks hatched on the 6 August, the time taken from hatching to fledging was about two weeks.  Three fledglings were seen on 24 August and a photo of the parent feeding the chick was captured. A new generation will be making their home here. It is heartening that the newly created habitat for grassland birds is thriving. The public garden provides easy access and enabled us to document the nesting behaviour of these Zitting Cisticolas.  We would like to thank our friends especially Chen Wah Piyong for sharing their knowledge and observations.

This juvenile Zitting Cisticola is only a few days old but already has acquired all the markings of the parent.  Photo: Norhafiani A. Majid.

Craig Robson. A Field Guide to the Birds of Thailand and South-East Asia