Return of the King

Every once in a long while, we get really lucky in life. For birders and bird photographers alike, it would be encountering a species that nobody has seen before. It sounds impossible in urban Singapore but it actually happened.

On 2nd May 2018, Ted Lee found it even if he did not realise the importance of his sighting. He posted his photo of a Great Slaty Woodpecker (GSW) on Facebook and every Singapore birder and bird photographer was stunned! It was a bird that had been thought lost to our forests, a bird so scarce that nobody had seen it before in Singapore. Alan Owyong calls this the sighting of the decade. Yes, it was really spectacular in the sense that this really was a totally unexpected, out of the blue sighting.

2018 has been an exceptional year so far for rarities with a string of super rarities turning up – Band-bellied Crake, Booted Warbler, Indian Paradise Flycatcher, and now this. The GSW takes the cake because it was supposed to be extirpated. Our rainforests have been well surveyed and nobody had even come close to a sighting of this legendary behemoth of a bird. It is also noteworthy as the largest living woodpecker species in the world since two larger species, Imperial and Ivory-billed Woodpeckers, both from the New World, are supposed to be extinct or on the verge of extinction.  It measures up to 50 cm in length from the tip of its beak to the tip of its tail and weighs a maximum of about half a kilogram. The GSW is an awesome bird especially when seen close up.  It has a big head, big eyes, a narrow neck, a very long chisel-like bill and a stiff, long tail. Overall, it is clothed in dark grey with just a bit of buff on its throat. Males differ from females in having a broad, bright orange malar stripe.

The GSW has a wide global range being found in the Indian Subcontinent south of the Himalayas and southern China south to Southeast Asia as well as the islands of Borneo, Java and Sumatra. It occurs in deciduous and evergreen forests usually below 600 m but can range as high as 2000 m in some parts of its range. Due to its preference for old trees, it is most regular in old growth forest but has also been seen in plantations, mangroves and swampy forests. As such, it is rated as globally vulnerable by IUCN due to the large scale loss of old growth forests in the region in recent years.

In Singapore, the GSW has not been seen since 1950. There were unconfirmed sightings in the 1970s but none since. There are however specimens in the Lee Kong Chian Natural History Museum including an individual collected in Woodlands in 1904, so it was originally here.

After the report by Ted Lee on 2nd May, I had expected to see birders and bird photographers climbing up the 163-m Bukit Timah to seek the GSW the very next day, on 3rd May. I happened to be leading a group of students on a field trip there and spent some time looking for it near the summit. No luck for me and everyone else who tried that day! To add to my misery, I injured my right knee while descending the hill.

On 4th May, more people tried but most were disappointed as they missed the bird except for Dominic Ng who got there around dawn and managed a photograph of the GSW. I was down at nearby Dairy Farm Nature Park where the most interesting bird was a pair of Greater Green Leafbirds. The pain in my right knee grew and I had to go for acupuncture to relieve it.

On 5th May, which was a Saturday, I was taking a break from birding and relaxing at home but any hope of peace was shattered very early on. My mobile phone kept beeping as whatsapp messages started from 7.00 am. The GSW was back and in view! My phone was still beeping three hours later. GSW still here, reported Kenneth Kee. I had some errands to do and only managed to get to Bukit Timah around noon. I bumped into Felix Wong as he was driving out, the smile on his face sufficient to tell me that he had seen the bird. The climb from the foot was very steep and I was careful not to push too hard, mindful of my knee injury. Sweat was pouring down my back as I huffed and puffed up the hill, each step seemingly harder than the last. Thankfully, I met Toh Yuet Hsin who was also keen to see the bird and we managed to reach the spot where the bird was last seen in good time.

Amongst the half a dozen people there toting binoculars and cameras was Low Bing Wen. He told me that we had missed the GSW by about 10 minutes and that it was probably still around. I scanned every branch carefully but couldn’t see anything. At 12.40 pm, some relief. The GSW called but despite anxious minutes passing by, we could not see it. The minutes ticked by. Nothing! A Chestnut-bellied Malkoha was a welcome distraction until someone shouted, “Woodpecker!” at 1.14 pm. I moved as fast as my injured legs could carry me and stood behind the group of people staring up a thick Shorea curtisi tree. A panicky few seconds passed before I laid my eyes on this giant woodpecker. It was about 15 metres up the tree, perched on a small branch and hammering away, searching for grubs. Elation was replaced by the frantic rummaging of my camera bag and I squeezed off shot after shot.

More people were coming up the hill and they soon showed happy faces as each had their own communion with their holy grail.

At 1.48 pm, we had the GSW in view for over half an hour, an eternity for a rarity, and I was satisfied at last. I had squeezed off 99 still frames, taken two short videos and also made a 30-second recording of its whinnying call. Job done, I descended the hill even as more people seeking this bird huffed and puffed their way up the hill. I heard that the bird was present most of that day and probably over 100 people had seen this mega rarity by then. This was a really special moment in Singapore birding, the return of the king of woodpeckers, and easily the ornithological event of the decade!

All photos by Lim Kim Seng.

Singapore’s Missing Birds – Scarlet Minivet, Pericrocotus speciosus
By Lim Kim Chuah.
I recalled often hearing the sweet, rapid and piercing whistles “weep-weep-weep-wit-wip” of the Scarlet Minivet, Pericrocotus speciosus during my walk around the forest of Bukit Timah Nature Reserve in the 90’s. However, seeing one usually entailed some neck breaking exercises as this species usually forages high in the canopy amidst the tall dipterocarp trees. But it’s worth the effort as the stunning red colors of the male bird is simply dazzling amidst the green canopy.

Male Scarlet Minivet taken at Panti on 10 August 2014 by Lim Kim Chuah.
Besides Bukit Timah Nature Reserve, this species has also been recorded in our Central Catchment Nature reserve forests. Sadly, its sweet sounding call is now silent in Singapore and has not been heard since the early 2000’s. The last one reported was an unconfirmed report of a male at Jelutong Tower in August 2004.
I still recall rather vividly the last one I saw in Singapore. It was a lonely female perched high on a dead branch at MacRitchie Reservoir during the bird race in Dec 2000. It appeared to be looking forlornly in the distance as though sensing that its existence in Singapore was ending.
The Scarlet Minivet belongs to the cuckooshrike (Campephagidae) family. There are five members belonging to this family in Singapore – Black-winged Cuckooshrike, Lesser Cuckooshrike, Pied Triller, Ashy Minivet and Scarlet Minivet. This species has a wide distribution and can be found from the Indian subcontinent to Southern China and many parts of SE Asia. Fortunately, it is a common bird in neighboring Johor and this is where I go to enjoy this delightful bird. Hopefully it will return to Singapore one day.
Reference: Lim Kim Seng. The Avifauna of Singapore. 2009. Nature Society (Singapore). Yong Ding Li, Lim Kim Chuah and Lee Tiah Khee A Naturalist’s Guide to  the Birds of Singapore. 2013 John Beaufoy Publishing Limited

Text and Photos by Raghav Narayanswamy.

I stumbled upon Hindhede Nature Park last spring when an Orange-headed Thrush popped up there. I had two hours to spare for birding that day and I was pleasantly surprised with what I saw. Before this not many people have heard about this corner of Bukit Timah Nature Reserve. The reserve now is only opened on weekends.

In just a couple of months, this rather small plot of land with nothing more than a flooded quarry and a short loop has offered me some great birding. 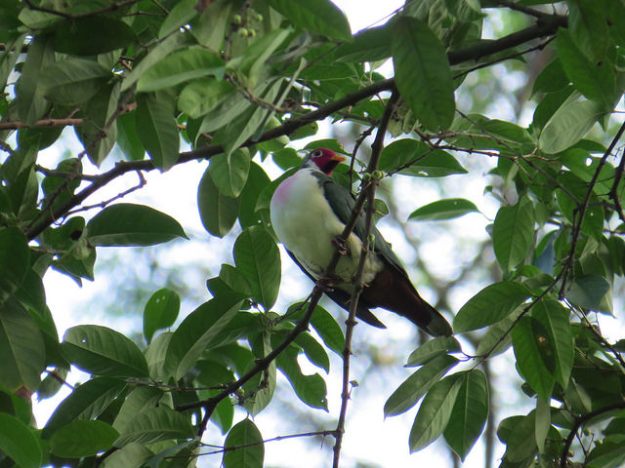 There’s always something happening here. Calls of the loud Greater Racquet-tailed Drongos, Red-breasted Parakeets, and Common Hill Mynas greet you when you walk in. Other uncommon birds like the Asian Fairy-Bluebird, Western Osprey, and the Emerald Dove, will keep you busy for long periods of time.

Compared with other more popular birding spots, this park is compact and you can expect to be amazed by the proximity of the birds to each other. It sometimes seems overwhelming to deal with so many birds at once, especially when they are meters from each other. At one particular spot in the park, a pair of Red-legged Crakes, four Sunda Scops Owls, and a pair of Brown Hawk Owls converge each evening, with me right in the middle of it all, struggling to pick one to shoot over the rest.

This family of Sunda Scops Owl is doing well at the Park.

What’s the first place you think of when asked, “Where can you find the Blue-winged Leafbird?” Chances are it was probably the Central Catchment, or Dairy Farm Nature Park, or Bukit Timah Hill. And I’d bet a large — avery large — sum of money that it was not Hindhede Nature Park. But when there’s a tree fruiting at Hindhede, you’re bound to catch sight of it, and good views are the standard here.

The Blue-winged Leafbirds making their appearance at Hindhede NP.

We all hear about fruiting trees at Dairy Farm, Bukit Timah, and Upper Seletar. But again, there’s a surprise coming from the Hindhede camp. With a pair of Jambu Fruit Doves, Cream-vented, Olive-winged, Red-eyed, and Black-crested Bulbuls, and at least two Blue-winged Leafbirds, you can’t go wrong with a quick visit.

Singapore is known across Southeast Asia as one of the best places for the globally-vulnerable Straw-headed Bulbul. After all, Noah Strycker came specifically here for it in his 2015 World Big Year at a point when he had already seen 90% of Singapore’s checklist outside of Singapore. But out of all the places I have seen this bird, Hindhede really stands out. It is nearly always around, calling, and offering great views.

Even birds that are traditionally seen around or past dusk, like owls, show up early here. Often, I don’t even need a flashlight for a decent photo, and the views, again, are guaranteed to be fantastic. Where else can you get to see three species of owls making their appearance almost daily. Other noteworthy sightings include the Square-tailed Drongo-Cuckoo, which was fairly active in the month of June, during which it was presumably breeding, and a pair of Van Hasselt’s Sunbirds. And all this was just in the last three months!

I cannot wait to see what the migratory season will bring, now that the breeding season is coming to a close and the trees are no longer fruiting. Will the thrushes stop over? I am sure the Asian Brown and Mugimaki Flycatchers will pass by. What about the visiting cuckoos?