Residents take centre stage while three species of straggling migrants continue to be reported. The key sightings for June are the arrival of the Austral migrant, the Horsfield’s Bronze Cuckoo, escaping the southern winter, and a nigrescens subspecies of the Ashy Drongo. 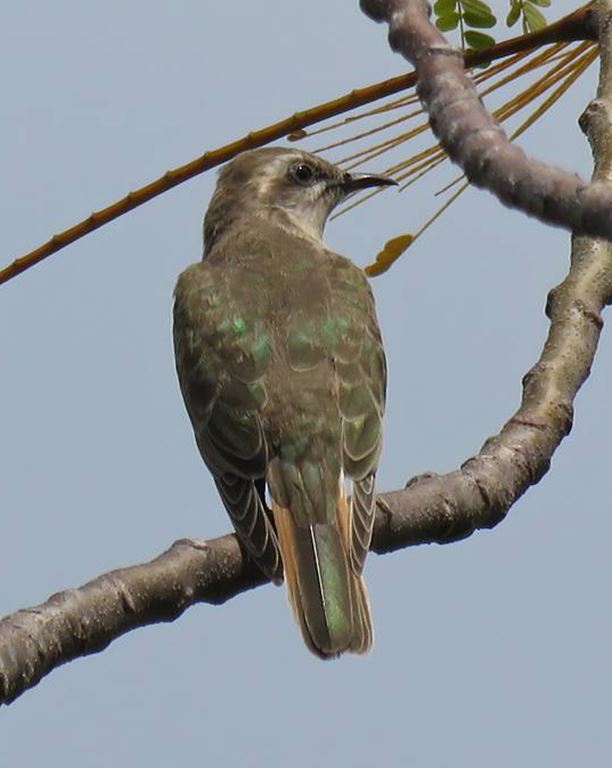 A Horsfield’s Bronze Cuckoo photographed by Carmen Hui at Satay by the Bay on 26 May 2018.

The most prominent Austral migrant to land on our shores in June is the Horsfield’s Bronze Cuckoo Chrysococcyx basalis. The first sighting of the cuckoo making landfall in Singapore was made by Carmen Hui last month, on 26 May 2018 at 1:29pm at Satay by the Bay, after she saw Martin Kennewell’s post of an adult and juvenile on 2 June 2018 from Punggol, and realised that her catch, which was photographed, was not a Little Bronze Cuckoo. Carmen’s report had preceded Martin Kennewell’s observation that the cuckoo had appeared in Bali and Java on 27 May 2018.

Reports of the cuckoo continued to stream through social media from 6 June 2018 onwards, largely coming from around the Punggol Promenade Nature Park, with additional reports of up to five birds at Halus on 10 June 2018 and the cuckoos were last seen on 19 June 2018.

A Horsfield’s Bronze Cuckoo, photographed at the Punggol Waterfront with its prey, showing a distinctive eyestripe and partly rufous-coloured outer tail feathers, which distinguishes it from the resident Little Bronze Cuckoo. Taken by Terence Tan on 6 June 2018.

While photographing the Horsfield’s Bronze Cuckoo, several birdwatchers and photographers spotted an Ashy Drongo Dicrurus leucophaeus nigriscens, the resident race of the species from Peninsular Malaysia and Southern Thailand, at Punggol on 6 June 2018.

The Ashy Drongo nigriscens subspecies photographed at Punggol on 6 June 2018 by Tuck Loong.

In his blog post, Alan Owyong quoted Malaysian birder, Tou Jing Yi’s comments about the bird’s key distinguishing characteristics (from the Black Drongo) – “lack of white spot on base of bill, long forked tail, very slender base on tail, non-glossy plumage that is not jet black but somehow greyish, these were all signs of an Ashy Drongo, the resident subspecies for the region, primarily resides mangrove areas in Peninsular Malaysia.” As noted by Alan, the last record of a nigrescens was at West Coast Park on 17 January 2004 (SINAV 18.1). Hence, this sighting represents a new date for this non-breeding visitor to Singapore. 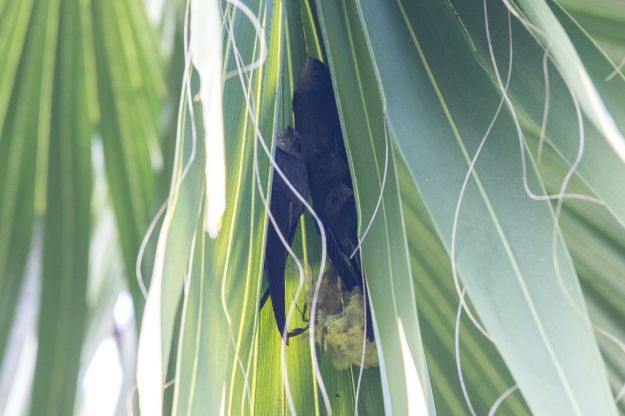 A family of Asian Palm Swifts at their nest at Bishan, by Adrian Silas Tay

Successful breeding was reported for a number of residents. Adrian Silas Tay reported the nesting of the Asian Palm Swift Cypsiurus balasiensis at Bishan, with the first chick fledging on 3 June 2018 and the second fledging on 5 Jun 2018. At Jurong Eco Garden (JEG) on 10 June 2018, Doreen Ang saw Oriental White-eye Zosterops palpebrosus juveniles accompanied by adults; she also noted an immature Brahminy Kite Haliastur indus flying around with an adult. 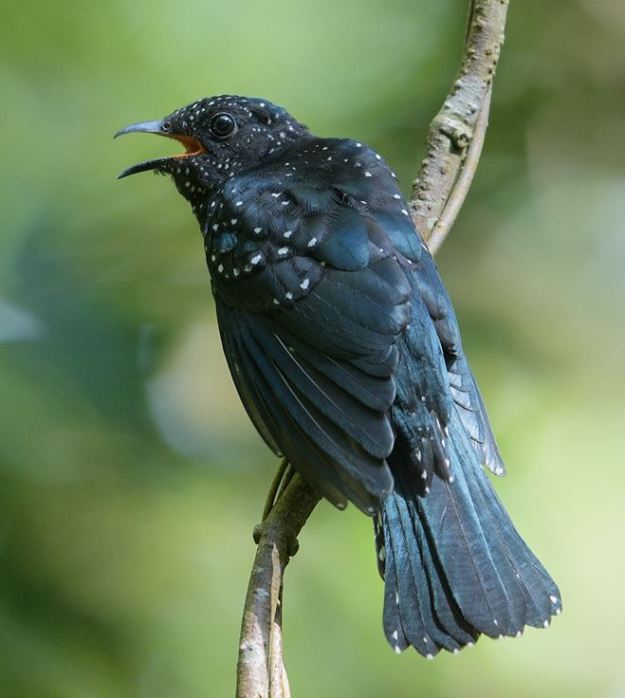 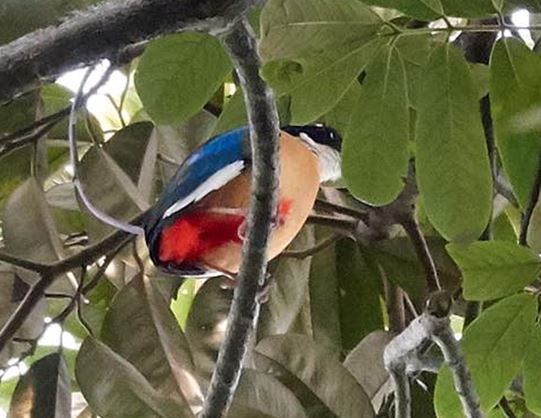 A Blue-winged Pitta photographed on Pulau Ubin on 24 June 2018 by Lim Kim Chuah.

June yielded two separate reports of the Blue-winged Pitta Pitta moluccensis, several were seen and heard on Pulau Ubin during the NParks-NSS Ubin Survey on 3 June 2018, while another was spotted by Tan Kok Hui at Kranji Marsh on 30 June 2018. 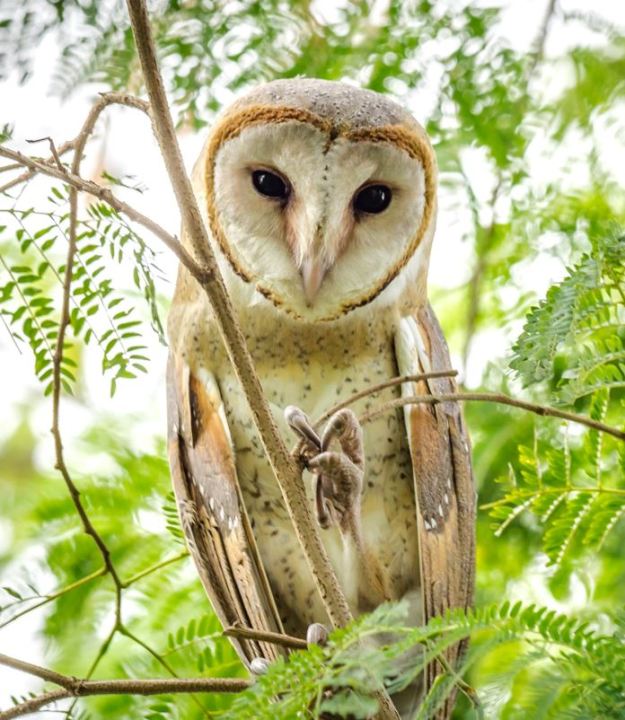 Barn Owl at Punggol photographed on 8 June 2018 by Terence Tan.

Other notable sightings include 25 Tanimbar Corella Cacatua goffiniana were spotted roosting near an Esso station along Dunearn Road on 4 June 2018 by Richard Saunders, a Barn Owl Tyto alba was spotted along Punggol Promenade Nature Park on 9 June 2018 by a jogger who alerted birders looking for the Horsfield’s Bronze Cuckoos along our north-eastern shore, a White-rumped Munia Lonchura striata at Lorong Halus by Lee Chin Pong on 23 June 2018, a House Swift Apus nipalensis at Changi Business Park on 26 June 2018 by  T. Ramesh, a Black-crowned Night-heron Nycticorax nycticorax at Singapore Botanic Gardens on 28 June 2018 by Mark Campbell, and two Abbott’s Babbler Malacocincla abbotti were spotted by birdwatchers at Sungei Buloh Wetland Reserve on 30 June 2018. 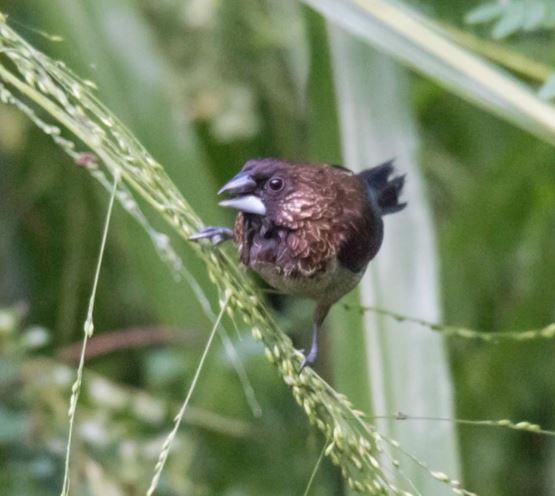 White-rumped Munia at Lorong Halus spotted on 23 June 2018 with some Scaly-breasted Munias by Lee Chin Pong.

Observers visiting the central catchment forest yielded a good number of residents. The  Sunda Scops Owl Otus lempiji was observed by Alan Owyong on 1 June 2018 at Hindhede (2 birds), and by Marcel Finlay at MacRitchie Park on 22 June 2018; two Thick-billed Pigeon Treron curvirostra by Kozi Ichiyama on 16 June at CCNR;  15 House Swift and 5 Plume-toed Swiftlet Collocalia affinis by Lim Kim Chuah on 22 June 2018 along the Rail Corridor near Hindhede. Also spotted were a Greater Coucal  Centropus sinensis by Tay Kian Guan on 24 June 2018 at Singapore Quarry; a Blue-eared Kingfisher Alcedo meninting by Luke Milo Teo on 25 June 2018 at Windsor Park; a Red-crowned Barbet Megalaima rafflesii by Steven Cheong at Dairy Fairm Nature Park on 25 June 2018; and Cream-vented Bulbul Pycnonotus simplex from Jelutong Tower – one bird spotted by Deborah Friets on 26 June 2018, and two by Francis Yap on 27 June 2018. Also spotted from the tower were Black-headed Bulbul Pycnonotus atriceps, with one on 22 June 2018, and two on 27 June 2018, and four Blue-rumped Parrot Psittinus cyanurus on 27 June 2018 by Francis Yap. 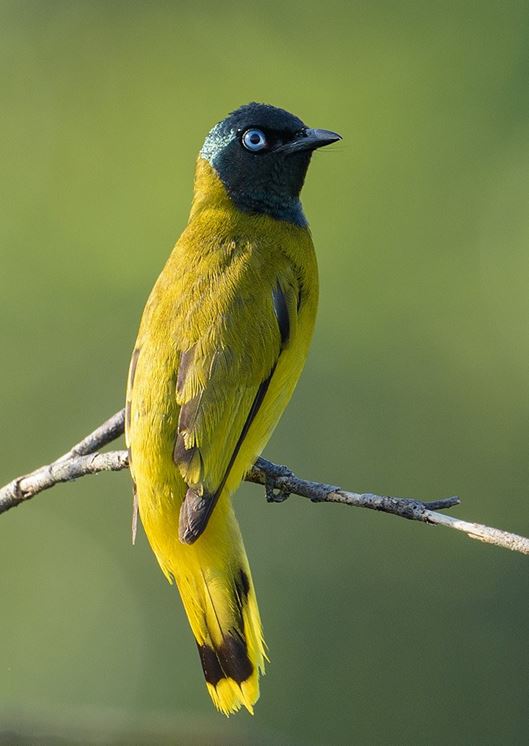 A Black-headed Bulbul in the Central Catchment Nature Reserve. Photographed on 22 June 2018 by Francis Yap.

In the meantime, a small number of overstaying northern migrants were reported. On 2 June 2018, Ruci Ong reported sighting an Asian Brown Flycatcher Muscicapa latirostris at Braddell Road. This represents a new late date by a full month from previous records. On 15 June 2018, a late staying White Wagtail Motacilla alba was spotted by T. Ramesh at Changi Business Park, while an Intermediate Egret Egretta intermedia was seen by Fadzrun Adnan at Kranji Marsh on 24 June 2018.

This report is compiled by Geoff Lim and Alan OwYong, edited by Tan Gim Cheong, based on selected postings in various facebook birding pages, bird forums, individual reports and extracts from ebird. This compilation is not a complete list of birds recorded for the month and not all the records were verified. We wish to thank all the contributors for their records. Many thanks to Carmen Hui, Tuck Loong, Adrian Silas Tay, Francis Yap, Terence Tan,  Lee Chin Pong and Lim Kim Chuah for the the use of their photos.