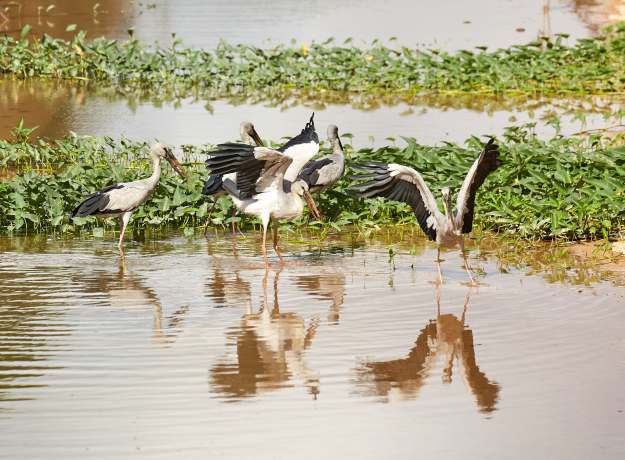 The 35th Annual Bird Census (ABC) was conducted on 29th March 2020 just before the nation-wide “circuit breaker” kicked in. Organized by the NSS Bird Group, it saw the involvement of 39 members and volunteers at 26 sites all around Singapore. This is an improvement from last year when 39 counters covered 20 sites. Altogether, ABC 2020 logged a total of 6,342 birds and 147 species, an overall increase from 2019’s 5,496 birds and 143 species. This could be due to more sites been counted in 2020 as compared to 2019.

So what’s Singapore most abundant bird? If you are guessing Javan Myna, you’re wrong! It is the Asian Glossy Starling which scored 847 birds to beat Javan Myna, with 737 birds, into second place. Third was Pink-necked Green Pigeon (358), followed by a resurgent House Crow (256) and Yellow-vented Bulbul (250). The rest of the Top Ten species are Little Egret (186), Common Redshank (170), Black-naped Oriole (164), Spotted Dove (152) and the nationally threatened Grey Heron (149).

The Top Twenty Species of 2020 are provided below: 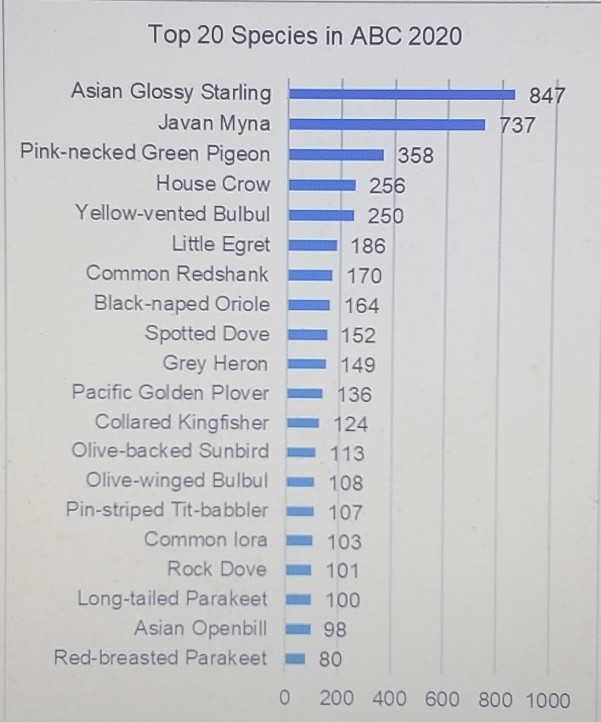 What about the sites? The most species diverse sites were Kranji Marshes with 70 species. The mixed habitats of marshland, grassland and open woodland provided at Kranji for a high biodiversity. Coming a distant second was Sungei Buloh Route 2 which had 56 species and third was Kranji Dam, with 47 species. The least species diverse sites were Lower Seletar Dam (27), followed by Chinese Garden, Mount Faber and Pasir Ris Park, all with 28 species. 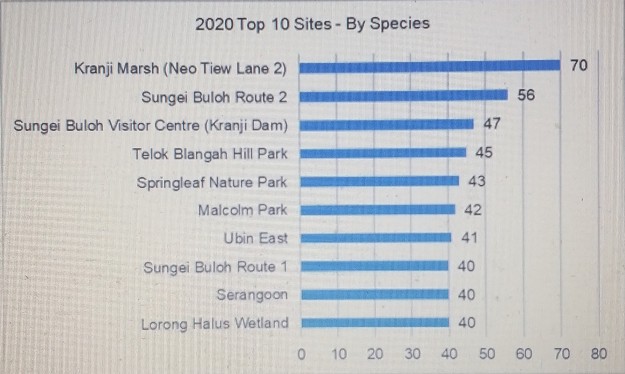 How about numbers? Well, the sites with the most number of birds counted were Sungei Buloh Route 1 with 495 birds counted followed by Sungei Buloh Route 2 (460) and Kranji Marshes (456). The sites with the least number of birds were Lower Peirce Reservoir with 80 birds, followed by Sime Track, Central Catchment Nature Reserve (130) and Bukit Batok Nature Park (137). 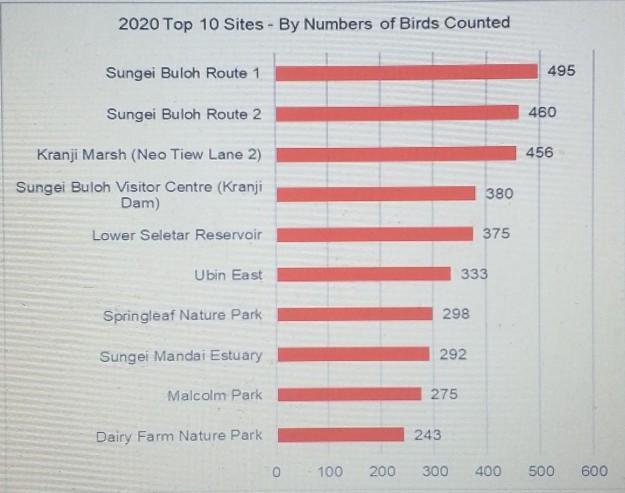 This census would not have been possible if not for the counters who braved the elements and helped us to complete our 35th year of census. So, our grateful thanks to 39 volunteers.