The return of the Blue Rock Thrush to the Pinnacle@Duxton. Photo: Seng Alvin

The buzz of the month had to be the return of the Blue Rock Thrush Monticola solitarius to the Pinnacle@Duxton on 19th. This time two males, thanks to Seng Alvin’s vigilance during his temporary stay. It stayed around into the end of the month giving many birders their lifers. The next excitement was another returnee to the fig tree at DFNP, a male adult Blue and White Flycatcher Cyanoptila cyanonmelana on 10th ( Alan OwYong). The main interest was whether this could be a recently split Zappey’s. It was last seen on 20th by Vernoica Foo.

Con’s photo of the Blue and White Flycatcher taken at DFNP clinched its identification.

Besides these two most wanted winter visitors,  there were other less rare visitors like Forest Wagtail Dendronanthus indicus from SBWR photographed by James Tann on the 2nd. Another Forest Wagtail was seen along Venus Loop by Veronica Foo on 8th and Thio Hb on 12th. Marcel Finlay had one more along the Lower Pierce Boardwalk on 13th. 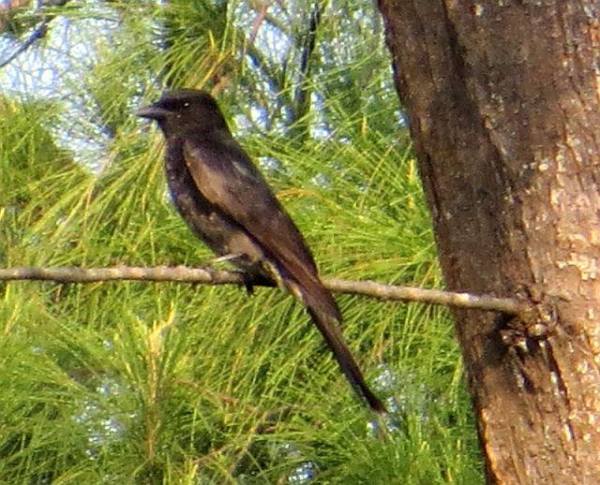 Notable visitors passing through were a Grey Wagtail Motacilla cinerea back at the Bulim Canal on 3rd (James Tann) and a rare visiting Black Drongo Dicrurus macrocercus at Punggol Barat on 4th ( Danny Lau, Tan Kok Hui et al). Two were later photographed at the Seletar side by Martin Kennewell on 24th. A Black Bittern Dupetor flavicollis was photographed at the Belayer Creek Mangroves by Kwek Jun Yi on the 8th. This is not its preferred habitat which is fresh water wetlands. It may have just made landfall.

Three sightings of the Crow-billed Drongos Dicrurus annectans were reported, one at CCNR by Lim Kim Seng on 8th, a first winter male at SBG on 15th by Richard White and another at Jelutong on 24th by Marcel Finlay.

A seldom seen perched photo of a Red-rumped Swallow taken at Kranji Marshes by Martin Kennewell.

Smaller migrant passerines include Dark-sided Flycatcher Muscicapa sibirica at Mandai on 10th by Lim Kim Seng and a very tame individual at the SBG on 6th (Richard White). A female Green-backed Flycatcher Ficedula elisae at Jelutong Tower was photographed by Laurence Eu on 22nd and a Yellow-rumped Flycatcher Ficedula zanthopygia at Kranji Marshes of all the places on 25th (Martin Kennewell and Richard Carden). Martin was clocking 80-90 species at Kranji Marshes at this time of the year picking out uncommon species like the House Swifts Apus nipalensis (3 birds) on 18th and Red-rumped Swallows Cecropis daurica on 19th and 26th. 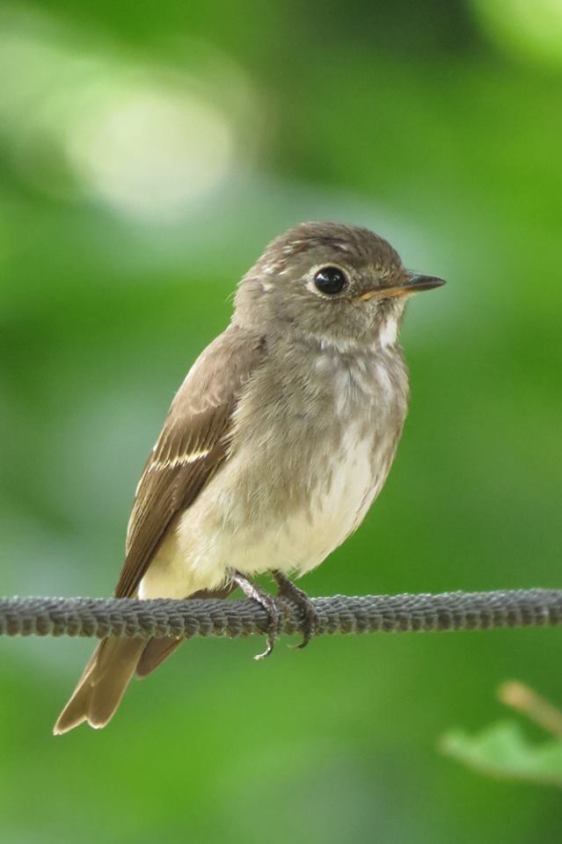 A very tame Dark-sided Flycatcher refueling at the Singapore Botanic Gardens before making its flight back north. Photo Richard White.

Eastern Crowned Warblers Phylloscopus coronatus were singing their hearts out in our forests at this time of the year. That was how Tan Kok Hui found one at DFNP on 11th. A White-shouldered Starling Sturnus sinensis was expertly picked out by Terence Tan among a flock of Daurian Starlings Agropsar sturninus at Seletar Crescent on 17th.

The Singapore Botanic Gardens is getting its fair share of migrants stopping over like the Oriental Dwarf Kingfisher Ceyx erithaca that made a short stop at the SBG on 2nd (Serena Chew). A Hodgson’s Hawk Cuckoo Hierococcyx nisicolor distracted the photographers temporary from the released Lady Amherst’s Pheasant on the 19th (Andrew Tan) and a Chestnut-winged Cuckoo Clamator coromandus was photographed there by Lee Chuin Ming on 25th.

Much of Punggol Barat is now over grown but fortunately a nearby patch is more open and has short grasses as cover. With the recent wet weather, parts of it were water logged, an ideal habitat for snipes to roost. No less than 150 Gallinago snipes were counted with at least half of them identified as Common Snipes Gallinago gallinago on 22nd (Martin Kennewell).  He also managed to find a good number of resident Greater Painted Snipes Rostratula benghalensis hiding among the taller sages. Visting Watercocks Gallicrex cinerea were also sighted with the most recent seen on 27th by Marcel Finlay.

Resident species that merit noting were an injured Barn Owl Tyto alba picked up near MBS on 6th ( Joe Lim). This could be from the family living under the Sheares Bridge. Two other owls, the Sunda Scops Owl Otus lempiji returning to the SBG to roost reported by Richard White on 14th and a surprise sighting of a Spotted Wood Owl Strix seloputo flying towards the buildings at Seletar Airport on 22nd evening (Martin Kennewell). Thick-billed Pigeons Treron curvirostra were photographed at the Chinese Gardens on 7th by Lee Chuin Ming, confirming their spread. Zacc HD picked up a House Swift Apus nipalensis flying over Seletar on 23rd. Keep a look out for these resident swifts to see if their numbers are increasing

The Oriental Pied Hornbills Anthracoceros albirostris at SBG successfully raised two chicks which fledged on 2nd (Millie Cher) and so did the Crested Goshawks Accipiter trivirgatus  on 19th at Bedok North. But the nesting of Oriental Pied Hornbills at Holland Drive somehow failed . The female was seen breaking out on 3rd by Lee Kia Chong but no chicks were seen feeding after that.

This report is compiled by Alan OwYong and edited by Tan Gim Cheong from selected postings in various facebook birding pages, bird forums and individual reports. Not all the records were verified. We wish to thank all the  contributors for their records. Many thanks to Seng Alvin, Con Foley, Danny Lau, Martin Kennewell, Richard White, Alan OwYong and Marcel Finlay for the use of their photos. Please notify alan.owyong@gmail.com if you find errors in these records.