Members of Nature Society posing for a group photo at Kranji Marshes. Many thanks to Lee Ee Ling (squatting extreme right) for arranging and leading the walk, Yap Wee Jin ( squatting extreme left) and Wing Chong ( standing back left) for assisting.

It was a cool and sunny Sunday morning when we arrived at the Kranji Marshes. A lush expense of greenery and cool waters greeted us when we stepped out of the bus. The hustle and bustle and noise of city life was replaced by the chipping sounds of birds all around. Everyone had their binoculars and cameras out ready for action when we started our walk at 8.15 am. This is one of the monthly walks to the core area of Kranji Marshes arranged by the Bird Group of the Nature Society (Singapore) with Sungei Buloh Wetland Reserve and National Parks Board.

The family of Red-wattled Lapwings have made Kranji Marshes their permanent home.

As we proceeded into the core area, less common birds such as the Red Wattled Lapwing and Daurian Starling were spotted. However, the highlight and top sighting for the day was the appearance of two Watercocks.

Highlight of the walk were the two Watercocks, a lifer for many of our members

Even though they only appeared for a brief moment, it was enough to make this trip worthwhile as they are uncommon winter visitor. A lifer for several members of the group who were obviously delighted with this sighting. ☺ 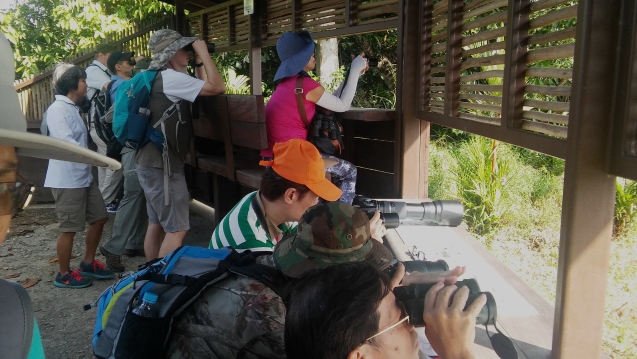 Bird watching in one of the many hides ensured that the birds were not disturbed.

Despite a brief moment of apprehension on seeing some black clouds in the sky towards the tail end of our walk, the good weather prevailed and our time passed quickly.

More pictures of birds sighted at the Kranji Marshes. 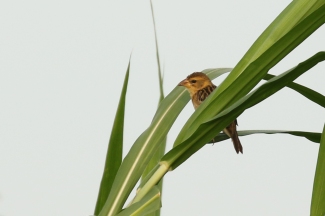 We ended our walk at 11 am with a good haul of 35 species much to the delight of all those who choose to spend the Sunday morning at the largest fresh water marsh in Singapore.

One of our many colorful Kingfishers, the White-throated poised for a catch.

Some additional information on our sightings: