Singapore’s Missing Birds – Scarlet Minivet, Pericrocotus speciosus
By Lim Kim Chuah.
I recalled often hearing the sweet, rapid and piercing whistles “weep-weep-weep-wit-wip” of the Scarlet Minivet, Pericrocotus speciosus during my walk around the forest of Bukit Timah Nature Reserve in the 90’s. However, seeing one usually entailed some neck breaking exercises as this species usually forages high in the canopy amidst the tall dipterocarp trees. But it’s worth the effort as the stunning red colors of the male bird is simply dazzling amidst the green canopy. 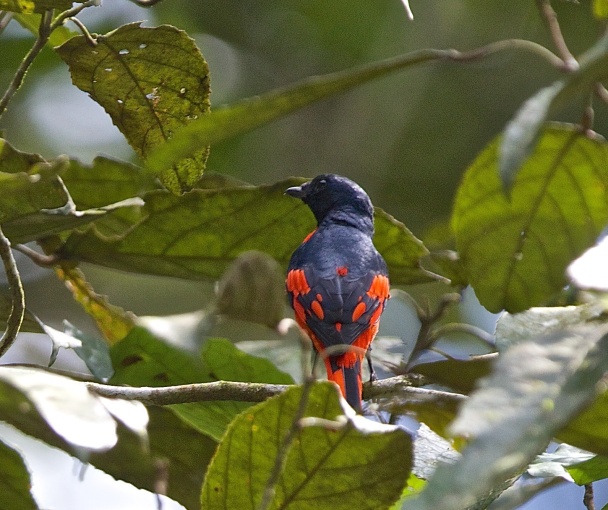 Male Scarlet Minivet taken at Panti on 10 August 2014 by Lim Kim Chuah.
Besides Bukit Timah Nature Reserve, this species has also been recorded in our Central Catchment Nature reserve forests. Sadly, its sweet sounding call is now silent in Singapore and has not been heard since the early 2000’s. The last one reported was an unconfirmed report of a male at Jelutong Tower in August 2004.
I still recall rather vividly the last one I saw in Singapore. It was a lonely female perched high on a dead branch at MacRitchie Reservoir during the bird race in Dec 2000. It appeared to be looking forlornly in the distance as though sensing that its existence in Singapore was ending.
The Scarlet Minivet belongs to the cuckooshrike (Campephagidae) family. There are five members belonging to this family in Singapore – Black-winged Cuckooshrike, Lesser Cuckooshrike, Pied Triller, Ashy Minivet and Scarlet Minivet. This species has a wide distribution and can be found from the Indian subcontinent to Southern China and many parts of SE Asia. Fortunately, it is a common bird in neighboring Johor and this is where I go to enjoy this delightful bird. Hopefully it will return to Singapore one day.
Reference: Lim Kim Seng. The Avifauna of Singapore. 2009. Nature Society (Singapore). Yong Ding Li, Lim Kim Chuah and Lee Tiah Khee A Naturalist’s Guide to  the Birds of Singapore. 2013 John Beaufoy Publishing Limited