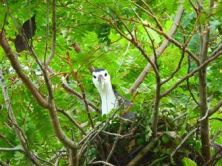 Contributed by Millie Cher 27 Feb 2016
I spotted the White-breasted Waterhen, Amaurornis phoenicurus, nesting and feeding on 23 February 2016 at Japanese Garden.
It was my first time seeing an adult waterhen climb a tree.  Out of curiosity,
I followed its movement.   To my surprised I found a nest and another waterhen was resting on the nest. I captured it on video and saw one of the adult waterhen feeding the chicks. I am very surprised to find out that the White-breasted Waterhen’s nest was on a tree and not on ground level.
Next day, 24 February 2016 I came back to check on them.   I witnessed the chicks were jumping off from the tree while the parents were waiting for them on the ground. Sad to say,  one chick died from jumping off the tree. Out of a total of four chicks, three survived. I am glad that they were successfully fledged and doing well.