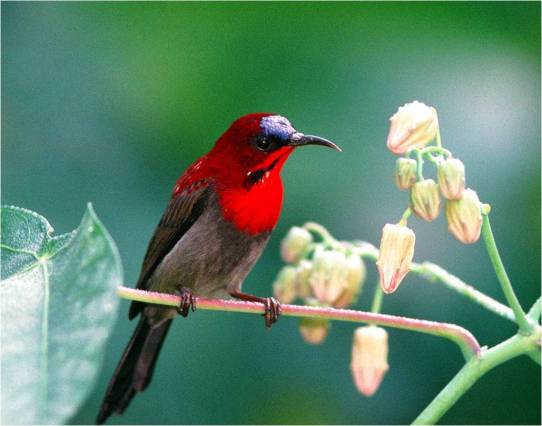 Crimson Sunbird. This was the photo used for the voting of the National Bird in 2002.

The Crimson Sunbird, Aethopyga siparaja was declared as the National Bird of Singapore when Dr. Shawn Lum, President of the Nature Society (Singapore) announced and shared this with fellow delegates at the 6th Asian Bird Fair Fellowship Dinner at the Quality Hotel Marlow on the 31st October 2015. The Common Rose, Pachliopta aristolochiae asteris, was also named as the National Butterfly of Singapore based on 7,603 votes that were cast by members of public from 21-March-30 April 2015’

The 6th Asian Bird Fair is a regional gathering of bird clubs and societies from Asia to promote bird watching and nature tourism in each other’s country. Singapore is hosting this for the first time. It was the most appropriate time for the Nature Society (Singapore) to make the “first claim” and to reflect on the wishes of the people after 13 long years. It will generate greater awareness of our natural heritage.

On 25th May 2002, the public was invited to vote for the National Bird of Singapore at the Nature Society (Singapore) 1st Nature Day at Parco Bugis Junction. Out of a total of 1,038 persons who voted at the 3 days event, the Crimson Sunbird came up tops with 400 votes ( 38%). The White-bellied Sea-eagle was second with 236 votes, Black-naped Oriole with 200 , Olive-backed Sunbird with 157 and the Greater-Racket-tailed Drongo with 45 votes.

The Common Rose has been voted as the National Butterfly of Singapore.

Those who voted for the Crimson Sunbird commented that it was small, active and red befitting the “Little Red Dot” coined by the former President of Indonesia. But most did not know that there was a historical link to our founder Sir Stamford Raffles. He was the one who collected, named this Sunbird, “Siparaja” and published the findings in a journal.

The Nature Society (Singapore) has engaged the Ministry of Culture, Community and Youth and other agencies on this matter and is hoping for their support.

We hope that this will add to our national identity, enhance our image as a Garden in a City, promote our biodiversity and benefit the commercial sector.