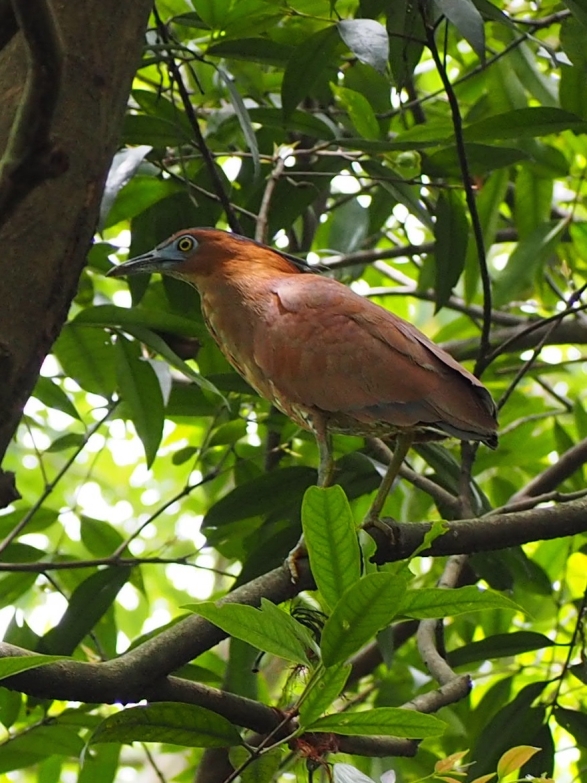 On the 2nd we have the third sighting of the Buff-rumped Woodpecker, Meiglyptes tristis, when Lim Kim Keang videoed one at Bidadari Cemetery. This is a non-breeding visitor that was seen twice at the Sime Forest before it was accepted into the 2003 Checklist. This has to be the standout bird of the month. Not to be outdone, Lim Kim Chuah managed to photograph a Pied Cuckoo, Clamator jacobinus, at Lorong Halus on 15th. This is the second record for the year for this non-migratory cuckoo in Singapore.  It has yet to be accepted into the Checklist as there were question marks on its origin after the first sighting. Kim Chuah also reported that Robert Teo told him that an Oriental Darter, Anhinga melanogaster, was seen at the Pekan Quarry at Pulau Ubin on the 31st. This Darter was first reported in August 2014 by Jean-Marc Chavette at another disused quarry at Gombak. According to Robert Teo, this Darter had been seen at the Ketam Quarry last November during Ubin Day. This species is now pending acceptance into the Checklist.

A juvenile Large Hawk Cuckoo at Bidadari by Francis Yap.

This March is noted for the returning of the migrant cuckoos, four species were recorded with the rare Large-hawk Cuckoo, Hierococcyx sparverioides, being the most sighted, which is quite a surprise. Bidadari Cemetery on 9th by Frankie Lim, Pasir Ris Park on 12th by Lim Kim Keang and Lorong Halus by Tan Eng Boo on the 18th. An Indian Cuckoo, Cuculus micropterus,  was photographed at Pasir Ris Park by Seng Alvin on 9th, Squared-tailed Drongo Cuckoo, Surniculus lugubris, at Bukit Timah NP by Seetoh Kin Meng on 4th and a Chestnut-winged Cuckoo, Clamator coromandus, at Seletar by Yong Yik Shih on 22nd. Resident Cuckoo species include a male Violet Cuckoo, Chrysococcyx xanthorhynchus, videoed singing at Wilton Close on 12th by Lucy Davis. We think that this is its mating call, the first time we got it on tape.

An uncommon Yellow-browed Warbler captured by Surin Kumar at Kembangan.

Other migrants on the way back include the two rare Wagtails, Forest, Dendronanthus indicus, at Lower Pierce Boardwalk on the 4th by Lee Van Hien, White Wagtail, Motacilla alba, at Lorong Halus on 7th by Lim Kim Seng. Two warblers, Yellow-browed, Phylloscopus inornatus  on a fig tree at Kembangan photographed by Surin Kumar on 15th and two Eastern-crowned Warblers, Phylloscopus coronatus, at Sime Forest on 30th by Lim Kim Seng. A single uncommon Sand Martin, Riparia riparia, was seen hawking insects by Lim Kim Keang also at Halus on 15th. A Hooded Pitta, Pitta sordida  at Sime Forest on 25th by Francis Yap. Three Daurian Starlings, Sturnus sturninus was seen at Kent Ridge Park during ABC on 22nd by Alan OwYong. The adult Malaysian Night Heron, Gorsachius melanolophus, that was first reported last month returned to the Jacob Ballas Children Gardens on the 12th. Craig Williams was there to capture it. 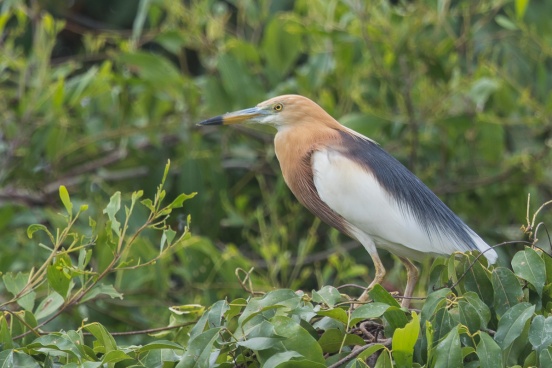 A Javan Pond Heron is breeding plumage taken at Farmway 3 by Francis Yap.

The pond herons at the Farmway 3 drain have started to assume their summer plumages. Francis Yap photographed both the Javan and the Chinese Pond Herons, Ardeola speciosa and Ardeola bacchus, there on the 15th. We have only one record of a non-breeding visitor the Jambu Fruit Dove Ptilinopus jambu. A male was photographed by Diana Jackson at Bidadari on 17th.

Notable resident species reported were a Yellow-crested Cockatoo, Cacatua sulphurea at the Singapore Botanic Gardens on 1st by Robin Tan, a Sunda Scops Owl Otus lempiji and a Brown Hawk-Owl, Ninox scutulata, on 4th by Shunda Lee at the MacRitchie Boardwalk. A Little Spiderhunter, Arachnothera longirostra, at the Durian Loop on the 7th and the Chestnut-bellied Malkoha, Phaenicophaeus sumatranus, at Kent Ridge Park on 22nd both by Alan OwYong and a Cinnamon Bittern Ixobrychus cinnamoneus at Lorong Halus on 28th by Francis Yap.

Breeding and post breeding records were evident with the sightings of an adult and juvenile Crested Goshawks, Accipiter trivirgatus, at Pasir Ris Park by Aldwin Recinto on 6th. Pasir Ris Park was also the breeding ground for our Spotted Wood Owls, Strix selopotu, where a pair of young was attracting hordes of photographers. The parents of a pair of Laced Woodpeckers, Picus vittatus, at the same park had to be happy with the successful fledging of its youngs. A pair of Changeable Hawk Eagles, Nisaetus cirrhatus,  was also preparing for a family at Mount Faber. Laurence Eu found a pair of Rufous-tailed Tailorbirds, Orthotomus sericeus building a nest at the Singapore Zoo on 4th.

Migrant raptor species reported were a Jerdon’s Baza, Aviceda jerdoni over at Halus on 1st by Lim Kim Keang, a Chinese Sparrowhawk, Accipiter soloensis, at Pasir Ris Park on 12th by Alan Ng, a hunting Peregrine Falcon, falco peregrinus, over at One-north Park on 13th by Alan OwYong and an adult female Japanese Sparrowhawk, Accipiter gularis, over at Punggol Barat on 24th by Joseph Tan.

There is only one reported casualty for the month. A juvenile Crested Goshawk, Accipiter trivirgatus crashed into a HDB block at the Bukit Timah area on the 20th, from David Tan.

Reference: The Avifauna of Singapore. Lim Kim Seng. 2009. Edited by Francis Yap. The above records are taken from the various bird FB groups. pages, reports and forums.  Many thanks for your postings. Thanks to Francis Yap, Craig Williams and Surin Kumar for the use of your photos.